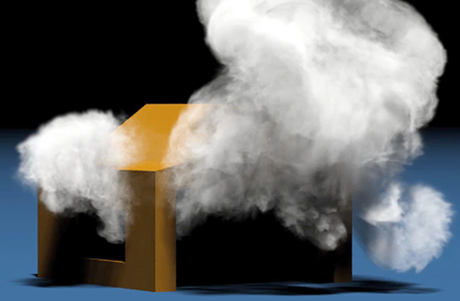 Theodore Kim/Provided
Doug James, professor of computer science, and Theodore Kim '01 shared an Academy Award with their colleagues for engineering software to simulate fire and smoke.

The red carpet turns Big Red as Cornell faculty and alumni receive Technical Achievement Awards from the Academy of Motion Picture Arts and Sciences Feb. 9. The awards were announced Jan. 4 and will be given at the annual Scientific and Technical Awards Presentation at The Beverly Hills Hotel.

Forget the sound of music, it's all about smoke and fire: simulating small smoke effects like a wisp from a cigarette or a campfire, not to mention fireballs or volcanic eruptions. Hollywood artists can now achieve these results in just a few hours. They can draw the overall shape of the smoke or fire, and the software will generate the fine details that make it realistic.

The software has been used in "Avatar," "Monsters vs. Aliens," "Sherlock Holmes," "Transformers: Revenge of the Fallen," "Alice in Wonderland," "Hugo," "Puss in Boots," "Super 8," "Kung Fu Panda," "The Amazing Spider-Man" and the forthcoming "Iron Man 3" and "Man of Steel."

Kim, assistant professor of media arts and technology at the University of California, Santa Barbara, worked on the project as a Cornell postdoctoral researcher with James in 2008-09. While at Cornell he created a Web page explaining the software: http://www.cs.cornell.edu/~tedkim/wturb/.

Breaking away from the size confines of desktop computer memory, the Katana computer graphics scene management and lighting software allows artists to deal with just one part of the scene at a time while holding its place in the big picture.

The Katana system was used in "Spiderman 3," "Cloudy With a Chance of Meatballs" and "Alice in Wonderland." Selan explains the Katana process in this short video:http://www.thefoundry.co.uk/products/katana/customer-demos/.

Unlike other Academy Awards to be presented this year, achievements receiving Scientific and Technical Awards need not have been developed and introduced during 2012. Rather, the Academy said, the achievements demonstrate a proven record of contributing significant value to the process of making motion pictures.

Stephen Marschner, associate professor of computer science, shared an Academy Technical Achievement Award in 2004 for a technique for simulating the translucency of skin, used to heighten the realism of Gollum in the "Lord of the Rings" films.

The National Science Foundation and the National Institutes of Health contributed to the funding of James' and Kim's research at Cornell.