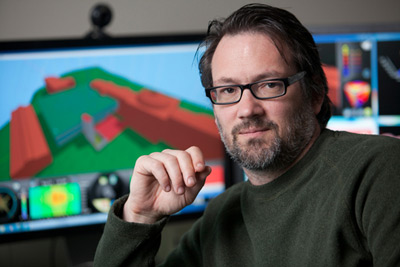 Assistant professor of architecture Kevin B. Pratt, noted for his research and expertise in sustainable design and for his enthusiasm and energy as a teacher and colleague, died at home of natural causes Feb. 19. He was 43.

Pratt joined the College of Architecture, Art and Planning (AAP) faculty in July 2007 after a semester as a visiting lecturer in 2006. He taught courses in architectural design, building technology, environmental systems and sustainable form.

“We are stricken to the heart by this loss,” said Kent Kleinman, the Gale and Ira Drukier Dean of AAP. “Kevin was one of a kind, a whirlwind of creative energy and intellectual generosity. It is unfathomable that he should be taken from us at this stage in his life, and the college mourns his absence.”

Department chair Mark Cruvellier said, “Kevin touched and inspired so many with his passion for his chosen field of expertise in sustainability and environmental concerns – and it is this legacy that will carry on.”

Pratt had scholarly interests in renewable energy and the application of computational technologies in sustainable design, Pratt was a fellow at the Atkinson Center for a Sustainable Future (ACSF) and a registered architect in New York state.

Pratt and Program of Computer Graphics Director Don Greenberg led a multidisciplinary research group funded by the U.S. Department of Energy and devoted to developing new methods in building simulation and energy analysis. The group linked the Departments of Computer Science, Architecture and Mechanical Engineering.

“Kevin’s broad experience, both technical and creative, enabled his out-of-the-box thinking, and he continuously tried to instill his same exploratory passion to his students and collaborators. He was my closest academic colleague,” Greenberg said.

“Kevin’s involvement ... goes back to the earliest days of the process of creating our proposal to the Bloomberg administration,” Huttenlocher said. “He was involved in the initial envisioning of the Built Environment hub, and in the site design and energy modeling work that was an important part of our proposed Roosevelt Island campus. Kevin was incredibly generous with his time, and served as a tremendous bridge between the worlds of architecture and technology.”

Pratt was a principal with his wife, former visiting professor of architecture Dana Cupkova, in EPIPHYTE Lab, a multidisciplinary design and research practice engaged in designing built environments at the intersection of ecology, computationally driven processes and systems analysis.

In January, they received a grant from the New York State Council on the Arts for an independent research project in architecture and design, seeking to create a prototype of a solar thermal energy capture system that explores the effects of surface geometry on passive heat distribution in buildings.

He was a contributing writer and architecture critic for Artforum and TimeOut New York, and published more than 50 articles in professional and general interest publications. He exhibited his and EPHIPHYTE Lab’s work in San Francisco, Hamburg, London and elsewhere.

Calling hours are Sunday, Feb. 24, from 2-4 p.m. at Bangs Funeral Home, Ithaca. A memorial service will be held March 2 at 2 p.m. in Sage Chapel, followed by a reception in Milstein Hall.