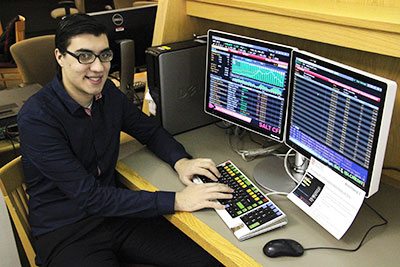 Brian Beaudry
Aleksandar Zvorinji '13 is creating an algorithm that could outperform many financial analysts in predicting the stock market.

Zvorinji '13, a College Scholar majoring in economics, psychology and information engineering, is working to complete an algorithm that could outperform the markets with a high degree of confidence.

"If this works, it could have big repercussions," Zvorinji says with a smile. "It could tell people the top stocks and how much to invest in each."

The idea could be stress-inducing for financial analysts, whose jobs might be in jeopardy if the algorithm works, but, ironically, Zvorinji needs them to continue their work for his algorithm to succeed. It's based on aggregating the predictions of more than 5,000 North American analysts.

A native of Sweden, Zvorinji chose to attend Cornell, wanting a break from the rigid educational structure of Swedish schools and the chance to combine his interest in math and science into a career with real-world applications, which he found in economics.

Once here, he discovered the College Scholar Program and jumped at the chance to work on a project combining his interests in economics, computer science, math and psychology. "I knew this would allow me to discover what I really want to do," he said.

"As with most empirical projects of this sort, Aleks won't know until he's nearly done whether it will work," Easley said. "But he is a good example of students who are blending several interests -- in Aleks' case computer science and economics -- and using theory and statistical tools to analyze real-world problems."

The economics department is working to expand its opportunities for undergrads to tackle research projects like this one, Easley said, a challenge in a department that graduates 200 majors each year.

Zvorinji's initial proposal focused on the idea of collective intelligence: Given a large enough group of people, taking the average of their solutions to a problem will lead to the exact answer. Zvorinji tweaked the idea a bit to tackle one of most puzzling problems he could think of -- predicting the stock market.

"Say one analyst for Apple stock is always about 10 percent above the mark, while another is usually 3 percent below," he explained. "My work creates a 'fund' for every analyst, and then evaluates each 'fund' on its performance using an algorithm similar to Google's. At the end of the day, it is a 'fund of funds problem' approached in a very novel way."

Zvorinji is working toward a graph that allows more accurate analysts and successful stocks to rise to the top. He's hoping to finish up the model before graduation and test it using data from the past. The final product, which he knows will probably come after graduation, could be a publicly available index or a product to sell to investment firms.

Zvorinji's other thesis project involves a psychological test for color malleability: whether people's perception of color can be changed through a process that makes one color more positive than another.

Upon graduation, Zvorinji will work at Deloitte Consulting, but he also plans to return to school for his MBA in a few years as he has an entrepreneurial venture idea he's eager to try.