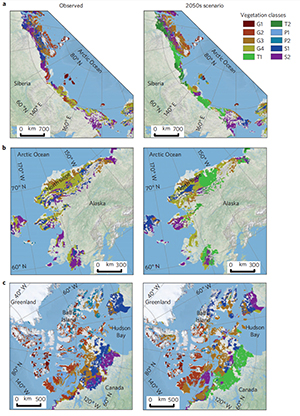 Provided
Distributions of vegetation in Siberia, Alaska and Western Canada today, left, and as predicted for 2050 by computer models. Replacing grasses with tree cover and woody shrubs (green, blue and purple) will decrease the reflection of sunlight and feed back to increase global warming.

Changes in Arctic vegetation due to climate change have probably been underestimated, according to a new computer analysis which shows that tree and shrub cover in the region will increase more than previously expected, accelerating climate change and possible adverse effects on wildlife.

“Such widespread redistribution of Arctic vegetation would have impacts that reverberate through the global ecosystem,” said Richard Pearson, a research scientist at the American Museum of Natural History’s Center for Biodiversity and Conservation and lead author of the study.

Pearson, working with scientists at Woods Hole Research Center in Falmouth, Mass., called in computer scientists with access to the high-performance computing facilities at Cornell’s Institute for Computational Sustainability (ICS) and AT&T Labs to conduct the analysis. The results appeared March 31 in the journal Nature Climate Change.

The overall prediction is that woody cover will increase by as much as 52 percent by the 2050s. With trees and shrubs hiding the snow, less heat will be reflected. Tree growth will expand hundreds of kilometers north of the present tree line in Siberia, while woody shrubs will overrun grasses in Alaska. The vegetation that is displaced will have no room to move farther north, so some habitats may disappear, along with the birds and animals that depend on them. The vegetation also will transpire more water vapor, which acts as a greenhouse gas.

Previous predictions have been based on computer simulations of the biological processes of plant growth in response to changes in temperature. The new approach analyzes what has actually been happening up to now and projects that into the future with unprecedented detail. The computer divided maps into thousands of cells 4.5 kilometers square, separately computing the outcome for each one.

The researchers fed in detailed data on how vegetation has changed from 1950 to 2010 in response to global warming. Juggling up to half a million variables, the computer learned how the distribution of vegetation correlates with climate, then used projections of future climate to compute trends for the future. Predictions were made for several different types of grasses, shrubs and trees; each plant group has a climatic “niche” – a set of conditions that favors its growth.

“Vegetation distribution shifts will result in an overall positive feedback to climate that is likely to cause greater warming than has previously been predicted,” the researchers said in their paper. Thick tree cover also may alter the ecosystem by depriving low-lying plants of sunlight, they added. Further along, the researchers said, there may be impacts on human society.

ICS operates a state-of-the-art parallel computer cluster of 600 processors, dedicated to research on issues of sustainability such as land use, climate modeling and the interaction of species with the environment, all problems involving complex computing with many variables. Running many calculations in parallel can vastly reduce the time needed to analyze these problems, said Carla Gomes, professor of computing and information science and director of ICS.

Different computer models were used at AT&T and Cornell, with good agreement on the results. The models were more than 80 percent correct, said Cornell graduate student Theo Damoulas, who designed the Cornell model.

The research was supported by the National Science Foundation, which also funded the creation of ICS and its computing facility.