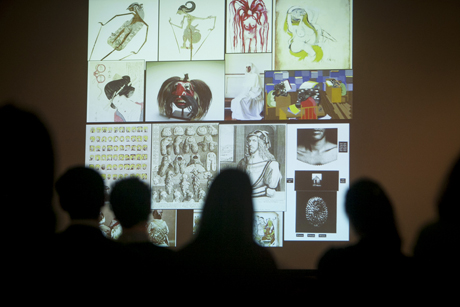 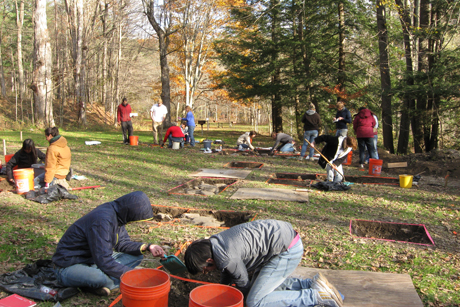 With projects ranging from local archaeology to the philosophy of causation, eight students presented their research in the humanities April 16 at the Herbert F. Johnson Museum of Art.

The Cornell Undergraduate Research Board and the museum presented the showcase, which also featured explorations of artwork challenging conventional narratives through media including film, text, hair and the body.

“My thesis revolves around the idea of informality – it’s in the DNA in Latin America,” Amaya said. She will display the work and defend her thesis May 8 in John Hartell Gallery, Sibley Hall.

“This project began over a decade ago in a very un-Indiana-Jones-like way, looking through local records to determine if there was a site, and where,” Yates said. The house was destroyed by fire in 1927, leaving stone foundations now a foot underground, architectural fragments and artifacts to sift through, and clues about the fire and the wealth of merchant Edward Tryon. Decorative brick and porcelain doorknobs were among the house’s features.

Mendieta’s “Silueta” series used the contours of her body “in a dialogue with the landscape” – in stone and fire, imprinted on earth and grass, and along riverbanks. “She’s working with the land, and captures the work in photographs and film, so she’s bringing together many contemporary art movements of the time,” Ristorucci said.

The society’s 13 undergraduate members combed the museum’s digital collections database for artwork, and arranged related programs including a faculty symposium. “We really wanted to showcase the geographic and chronological breadth of the collection,” Kremnitzer said.

Art major Emily Greenberg’s “Narrative Across Media” explored “how form and narrative relate to artwork,” she said, highlighting several projects that led to her thesis, on Twitter fiction and other hybrid book technologies.

Greenberg ’13 replaced dialogue in “Calvin and Hobbes” to construct different narratives, created a pop-up book on the housing crisis, an “Occupy Wall Street” comic book and a film, “Once Removed,” inviting viewers to interact with projected images of people in silhouette.

Design and environmental analysis student Veronica Yambrovich ’13 presented her interactive “Massive Mini-Golf Motherboard,” which won a recent design competition and will be installed in June on Governor’s Island in New York City.

Other presenters included human ecology student Diana Wee ’14 and fellow Urban Semester Program students on the service-learning project, “An Outlook on Sustainable Living in North Brooklyn,” and Justin Tyvoll, a senior in the Sage School of Philosophy, discussing “the sort of project even a lot of philosophers would not agree with.”

Tyvoll’s thesis-in-progress, “An Examination of Transcendental Freedom,” concerns good and evil and the retro-causality of actions, as applied to the philosophy of religion – specifically, how an act can have effects both backward and forward in time.