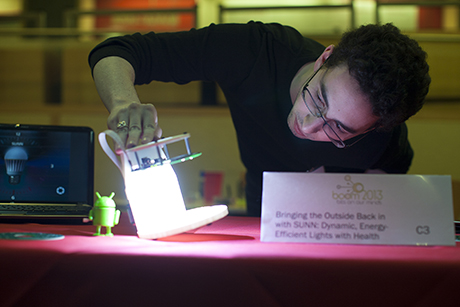 Lindsay France/University Photography
Bringing the Outside Back in With SUNN: Dynamic, Energy Efficient Lights with Health Benefits won the GE: Imagination at Work Award at BOOM 2013.

If you want to see the future of technology, look at what today’s students are inventing. An array of examples was on display April 3 at the annual BOOM (Bits on Our Minds) exhibition in the Duffield Atrium.

Although organized by Computing and Information Science in collaboration with the College of Engineering, BOOM showcases projects from any discipline, any college, as long as they use digital technology.

Of course there were games. Six Degrees of Bacon challenges players to navigate online from a random Wikipedia page to the Wikipedia article on bacon (the food, not the actor), and Splat lets you play paintball with no mess, using smartphones to record hits.

Smartphones also turned up in an app to notify friends of the location of a party; and when the guests show up, you can turn on the automated mechanical bartender that was displayed nearby.

For the truly dedicated geek, there were projects in pure computer science. As a sign of the times, many dealt with database management in the cloud.

At every BOOM are projects destined for national competitions, like CUAir, a small aircraft that can fly a GPS-defined route and send back surveillance images; the Autonomous Underwater Vehicle, which follows a programmed course underwater; and Cornell Baja, for which students design, build and race an off-road vehicle. These projects involve teams of 30 to 40 students, combining expertise in mechanical and electrical engineering and computer science; as well as students managing the business end to raise money and scrounge hardware.

The event concludes with awards: The Where’s the BOOM? Award, chosen by Computing and Information Science faculty, went to Splat, and the People’s Choice award, based on spectator voting, to CUAir.

BOOM is supported by Morgan Stanley, Yahoo!, eBay, General Electric, Goldman Sachs, Facebook, Google and Applied Predictive Technologies. The sponsors also set up booths at the event, most staffed by Cornell alumni who work for the companies. They are there hoping to attract the students who have come up with innovative projects and any others who might stop by.