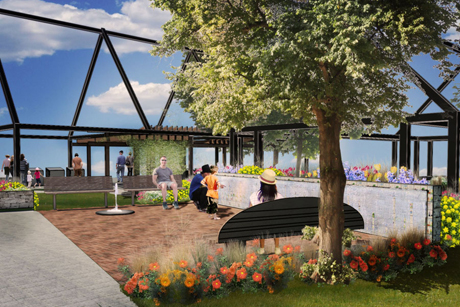 Drury University
A rendering of the OSSP planned for a site in Cunningham Park, Joplin, Mo.

A Cornell researcher leads a team that was recently awarded a $585,000 National Open Spaces Sacred Places (OSSP) Award from the TKF Foundation to design, build and research spaces in Joplin, Mo., and in the New York City metropolitan area – that will focus on healing aspects of the human-nature interaction in the wake of disaster.

The first site will be built next to Cunningham Park in Joplin, where residents are recovering from a May 22, 2011, tornado that killed 158 people, injured more than 1,000 and caused close to $3 billion in damage. Early designs include a butterfly garden and overlook. The site is on three lots where houses were destroyed by the tornado and purchased by the city of Joplin to expand the park.

The New York City site is yet to be determined but will provide a healing space for residents who suffered from Hurricane Sandy, which hit the city October 29, 2012, causing floods and power outages and more than $42 billion in damages in New York state. 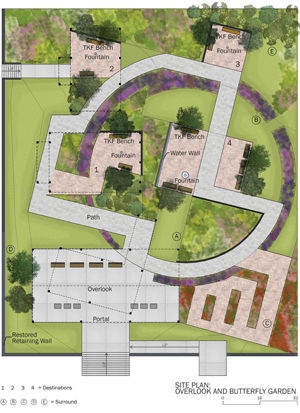 Drury University
A plan for an Open Place, Sacred Space (OSSP) site in Joplin, Mo., for healing after the May 2011 tornado.

The five-year award for the “Landscapes of Resilience” project comes on the heels of a one-year, $75,000 planning grant from the TKF Foundation that included research to document the efficacy of such OSSPs, and preliminary design principles for instilling sacred, healing elements to these spaces.

“Our idea was that open spaces were especially important for a post-disaster, post-catastrophic context,” said Tidball, who serves as associate director of the Civic Ecology Lab and program leader for the Nature and Human Security Program at Cornell.

“The OSSPs will be nodes on the landscape where people can connect to values [of natural elements for healing after a disaster], and these places will become portals where people can reconnect with nature,” he said.

The grant will include a comparative study of the two OSSPs focusing on the role that these spaces may play in recovery; the design, building and implementation of the two spaces, which will comprise about half the total budget; and a documentary to share the process and study findings.

Researchers at Drury University will design the Joplin OSSP, while a researcher at The New School and TILL, a Newark, N.J.-based landscape architecture and urban design firm, will oversee design of a New York space.

OSSPs are required to include a portal, paths, a “feature that encourages quiet, fascination, joy and spiritual connection with nature,” and surrounding design elements with plantings, trees or fencing to help create a separate and natural atmosphere, according to the TKF Foundation.

Tidball also is the state coordinator for the New York Extension Disaster Education Network and the author of “Greening in the Red Zone” (Springer, June 2013). The book includes case studies and argues that creation of and access to green spaces leads to resilience and recovery in areas disrupted by war or disaster.

Other grant partners include the city of Joplin, New York City, Forest ReLeaf of Missouri and Great River Associates.