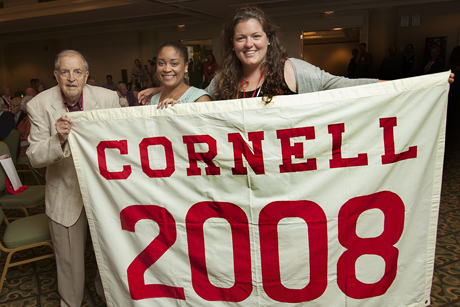 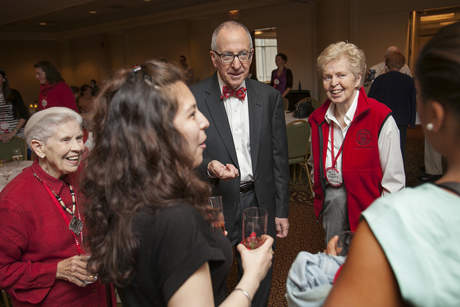 Margaret Sheehe ’08, a third-generation Cornellian, reflected on her excitement at finally arriving at her first Cornell Reunion (she attended her mother’s Class of 1976 Reunion at four months).

“It’s my first time back for Reunion as me,” said Sheehe, co-chair for the Class of 2008, as she accepted her class’s banner from this year’s most senior reunion class. “It’s really exciting. We’re watching you [Class of 1938], so we will know how to do it.”

The event, established in 2011 to mark the first-ever 80th Reunion at Cornell, connects the most senior returning alumni with the newest Reunion class. During the reception, the Class of 1938’s John Clement presented the Class of 2008 – represented by co-chairs Sheehe and Ebony Scott ’08 – with their first Reunion banner.

“The one thing previously missing at Cornell’s Reunions was the connection between the classes, across the generations,” said Alice Katz Berglas ’66, class president and daughter of Sy Katz ’31. “What I thought would be wonderful was for representatives from each class to meet to hand down the new class banner. Basically, for the older class to remind the younger class that they own their time on the Hill, so run with it, but be sure to celebrate it with the grand, universitywide Cornell panache.”

The ceremony, inspired by the vision and spirit of the late William “Bill” Vanneman Sr. ’31, gives the most senior alumni a concrete role at each Reunion. Vanneman served as his class president since commencement and died just short of his 80th Reunion in 2011.

Vanneman, his classmates and his friends – including Katz – “were the greatest champions of Cornell and Cornellians,” said James Mazza ’88, associate vice president for alumni affairs, who recognized the presence of Ting ’67 and Jane Wallace Vanneman ’68 and Berglas. “Bill’s children and Sy’s children have kept that tradition alive.”

President David Skorton spoke of the state of the university that the returning classes helped to forge. He mentioned, among other things, the record 40,000 applications received for the Class of 2017, the 1,017 student organizations on campus, Cornell’s success in athletics and the Cornell NYC Tech campus.

“Your alma mater is ranked the 14th best university in the whole world,” Skorton told the returning classes. “The place is better than it ever has been. Your loyalty means a lot to us in every imaginable way.”