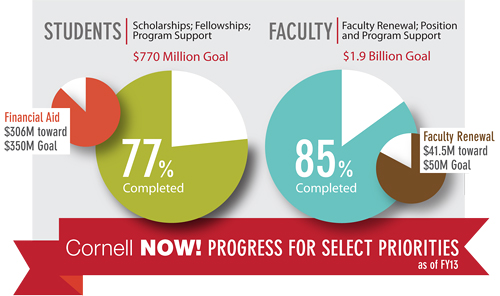 Cornell University closed fiscal 2013 with a record-breaking $475 million in cash gifts to the “Cornell Now” campaign, including $278.1 million for the Ithaca campus, its highest ever in cash contributions.

The Cornell Annual Fund raised a record-breaking $33.3 million from an unprecedented 34,194 donors, surpassing its goal for the 11th year in a row.

Alumni, parents and friends gave a total of $627 million in new gifts and pledges for all campuses – including Weill Cornell Medical College and Cornell NYC Tech – making fiscal 2013 the third-best fundraising year to date.

Fiscal 2013 also set a new bar for the total number of donors (more than 51,000) and returning donors: At the start of fiscal 2014, more than 40,000 donors had gained membership in the 1865 Society, which recognizes those who have given for at least two consecutive years.

“It’s inspiring to see our growing base of supporters, who choose to assist the university so generously,” says President David J. Skorton. “More and more Cornellians clearly believe in the university’s ability to transform lives and have a meaningful impact on the complex problems facing our community, state, nation and the world.”

Glimpses of a Year of Giving:

Gifts for such top strategic priorities as faculty renewal and endowed faculty positions totaled $34.5 million – aiding in recruitment efforts that yielded 76 new tenure-track and tenured professors in academic year 2012-13 for the Ithaca campus. In addition, undergraduate scholarships received $28 million last year – including gifts that completed the Scholarship Match Challenge – helping Cornell ease students’ debt burden. More than 60 percent of undergraduates receive some form of aid, and students from families making less than $60,000 have no loan obligation in their financial aid packages. Cornell is set to spend nearly $245 million for undergraduate financial aid in fiscal 2014.

“Cornell’s commitment to excellence begins with hiring superb faculty and providing access and opportunity to outstanding students from all walks of life,” says Provost Kent Fuchs. “Support for our campaign strengthens our ability to prepare Cornellians to make a difference wherever they apply their knowledge.”

Charles Phlegar, vice president for alumni affairs and development, noted that support for new buildings and facilities such as Klarman Hall and Bill & Melinda Gates Hall, which is set to open later this fall, has also been vital in supporting teaching, research and public engagement. “These landmark facilities help attract top students and faculty, give them the tools they need to pursue cutting-edge research, and create benefit for the surrounding communities – from highly skilled workers who build and run the facilities themselves, to the many businesses that can trace their roots to innovations born in our labs,” he says.

Also in fiscal 2013, “Discoveries That Make a Difference,” the previous campaign for Weill Cornell Medical College, came to a successful close. Cornell NYC Tech raised $147.7 million, including a $133 million gift to name the Joan and Irwin Jacobs Technion-Cornell Innovation Institute.

Jose Perez Beduya is a writer for Alumni Affairs and Development.