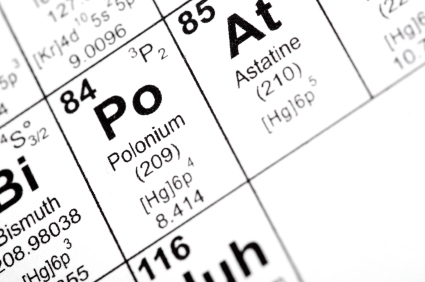 iStockphoto
Astatine (element No. 85) is among the world’s rarest elements. A new study theorizes how the element would look and behave were scientists able to observe it in its condensed form.

Astatine is among the world’s rarest elements – with a maximum half-life of just eight hours, found in tiny amounts in natural radioactive decay chains, but also produced by bombarding bismuth with energetic atomic particles. The late Dale Corson, Cornell’s eighth president, was one of the discoverers of astatine, synthesizing it for the first time with Kenneth McKenzie and Emilio Segre in 1940.

Yet astatine (element No. 85) also leaves a “curious void” in the Periodic Table of the Elements: Its properties in solid or liquid, or condensed form, are simply unknown, reports a Cornell team in a study by former postdoctoral associate Andreas Hermann that includes physicist Neil Ashcroft and chemist Roald Hoffmann. The new study theorizes how astatine would look and behave were scientists able to make enough of it to touch and observe (although it would be extremely radioactive).

Ashcroft, the Horace White Professor of Physics Emeritus; Hoffmann, the Frank H.T. Rhodes Professor in Humane Letters Emeritus and 1981 Nobel laureate in chemistry; and Hermann, now at the University of Edinburgh’s Centre for Science at Extreme Conditions, describe theoretical, condensed astatine in a paper accepted for publication in Physical Review Letters. Their paper was spurred by Corson’s groundbreaking discovery.

Condensed astatine, according to electronic property theories, would be monatomic, meaning the atoms do not form molecular pairs; and metallic, making it an unusual addition to the Periodic Table’s halogen group.

When other halogens are in condensed form under normal atmospheric pressures, “nothing much really happens to them,” said Ashcroft, for they remain in pairs of atoms, as they do in the gas form. But as astatine is condensed, they predict, the pairing comes apart and the element becomes monatomic and simultaneously metallic – a bit like mercury (another chemical curiosity, Hoffmann noted), but not in liquid form.

Scientists have made other halogens metallic by “squeezing,” or applying pressure to their molecular structures. But in the Cornell paper, it is reported that astatine requires no squeezing; it becomes metallic the moment it is condensed.

In the 70 years since its discovery by Corson et al., astatine has remained little studied, even though it has some medical applications, but advances in supercomputing and in theories of electronic structure of condensed matter are allowing scientists to make predictions about the fleeting element. They can then study the even more exotic “superheavy” elements further down the Periodic Table, part of a promised “island of stability” of long-lived, non-decaying elements, Ashcroft noted.

The largest amount of astatine ever created is 0.05 micrograms – not very much at all, Hoffmann said, though that it is still around 140,000 billion atoms. He, Ashcroft, and others plan to keep exploring some of the fundamental mysteries in the Periodic Table.

The research to be published under the title “Condensed Astatine: Monatomic and Metallic” was supported by the National Science Foundation and the U.S. Department of Energy.