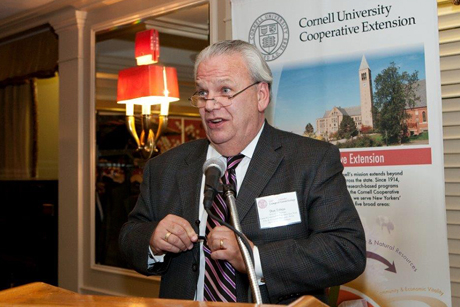 For many years, it’s been a common response to anyone seeking to understand Cornell’s presence in New York City: “Go see Don Tobias!” Whether meeting a new Cornellian or an old friend, Don would invariably take time to share his enthusiasm and knowledge about how the university’s land-grant mission reaches citizens and institutions across the five boroughs. His passion and commitment made an immediate impact on anyone lucky enough to visit his office or encounter him in their neighborhood.

In the city that never sleeps, Don worked nonstop in his role – as a mentor, visionary, teacher, researcher, cheerleader and partner. He transformed the work of so many who knew him and guided programs that touched thousands of New Yorkers. Under his leadership, CUCE-NYC translated Cornell research into innovative programming tailored to meet the diverse needs of New Yorkers in three main areas: nutrition and health; urban environment; and family and youth development. By helping individuals and families to eat better, live more sustainably, and support the needs of children and teens, these programs embody Cornell’s founding land-grant principles.

In the past few days, faculty and staff members, friends and others from across Cornell and New York City and Ithaca have shared anecdotes and remembrances of their friendship with Don. His inspiring vision of a university that is changing the world comes through in so many personal stories. These memories are a fitting legacy for Don and should offer some comfort to his family during this difficult time.

When I arrived at the College of Human Ecology in 1992, Don Tobias was a person whose quick friendship set the tone for a professional partnership that lasted the next two decades. Even then it was clear that Don always advocated for others. In 1996, we were the undergraduate advising coordinators for our respective departments that would soon merge. During a period of significant institutional change, Don was a great partner as we both reached out to our students to guide them into a newly formed Department of Policy Analysis and Management.

Don’s calm leadership during another time of crisis also stands out. Three years ago, SNAP-ED, the statewide nutrition education program active in all five boroughs of New York City, was at risk of losing nearly half of its funding. The whole program was at stake. Don worked tirelessly through the crisis, meeting with city officials, local groups, his staff, and other partners to preserve the core of the program. He never gave up on finding a successful way to bring the program back.

CUCE-NYC’s 2012 program report documents the full range of extension programs that, despite repeated funding challenges, show a high level of impact in New York City. Nutrition education programs are reaching more than 70,000 individuals in all five boroughs, programs are engaging kids with science through 4-H, and innovative urban gardening and farm-to-market programs are models for other states and countries. All of these speak to Don’s legacy.

One of my fondest memories of Don was joining him in New York City in a packed room to celebrate the 100th anniversary of Cornell Cooperative Extension. The success of Don and his staff’s work was on full display: appetizers cooked and served by students from partnering Food and Finance High School, and a roomful of city officials, alumni, friends and citizens hearing from Don about the wide reach of CUCE-NYC programs. He shared these many successes with all of us and, no matter the challenges, his vision of what was possible always showed through his work.

What stands out most to all who knew Don was his passion and dedication for improving lives by connecting New Yorkers to the knowledge and resources of Cornell. He will be deeply missed, but his work will carry on through the many programs and partnerships he established while leading CUCE-NYC.