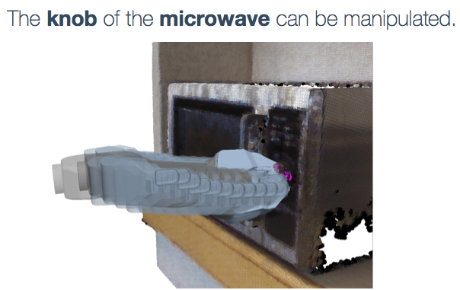 Provided
Experimental robots have been trained, using video simulations, to operate many appliances. By consulting Robo Brain, a robot with no training can acquire this knowledge.

To serve as helpers in our homes, offices and factories, robots will need to understand how the world works and how the humans around them behave. Robotics researchers have been teaching them these things one at a time: How to find your keys, pour a drink, put away dishes, and when not to interrupt two people having a conversation.

This will all come in one package with Robo Brain, a giant repository of knowledge collected from the Internet and stored in a robot-friendly format that robots will be able to draw on when they need it.

“Our laptops and cell phones have access to all the information we want. If a robot encounters a situation it hasn’t seen before it can query Robo Brain in the cloud,” explained Ashutosh Saxena, assistant professor of computer science. 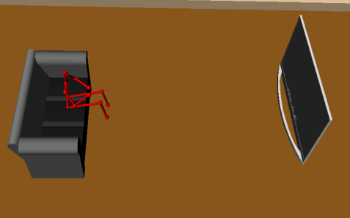 Provided
From images and videos, Robo Brain can learn the relationships between humans and everyday objects.

Saxena and colleagues at Cornell, Stanford and Brown universities and the University of California, Berkeley, started in July to download about one billion images, 120,000 YouTube videos and 100 million how-to documents and appliance manuals, along with all the training they have already given the various robots in their own laboratories. Robo Brain will process images to pick out the objects in them, and by connecting images and video with text, it will learn to recognize objects and how they are used, along with human language and behavior.

Saxena described the project at the 2014 Robotics: Science and Systems Conference, July 12-16 in Berkeley.

If a robot sees a coffee mug, it can learn from Robo Brain not only that it’s a coffee mug, but also that liquids can be poured into or out of it, that it can be grasped by the handle, and that it must be carried upright when it is full, as opposed to when it is being carried from the dishwasher to the cupboard.

The system employs what computer scientists call “structured deep learning,” where information is stored in many levels of abstraction. An easy chair is a member of the class of chairs, and going up another level, chairs are furniture. Sitting is something you can do on a chair, but a human can also sit on a stool, a bench or the lawn.

A robot’s computer brain stores what it has learned in a form mathematicians call a Markov model, which can be represented graphically as a set of points connected by lines (formally called nodes and edges). The nodes could represent objects, actions or parts of an image, and each one is assigned a probability – how much you can vary it and still be correct. In searching for knowledge, a robot’s brain makes its own chain and looks for one in the knowledge base that matches within those probability limits.

“The Robo Brain will look like a gigantic, branching graph with abilities for multidimensional queries,” said Aditya Jami, a visiting researcher at Cornell who designed the large-scale database for the brain. It might look something like a chart of relationships between Facebook friends but more on the scale of the Milky Way.

Like a human learner, Robo Brain will have teachers, thanks to crowdsourcing. The Robo Brain website will display things the brain has learned, and visitors will be able to make additions and corrections.

The project is supported by the National Science Foundation, the Office of Naval Research, the Army Research Office, Google, Microsoft, Qualcomm, the Alfred P. Sloan Foundation and the National Robotics Initiative, whose goal is to advance robotics to help make the United States more competitive in the world economy.