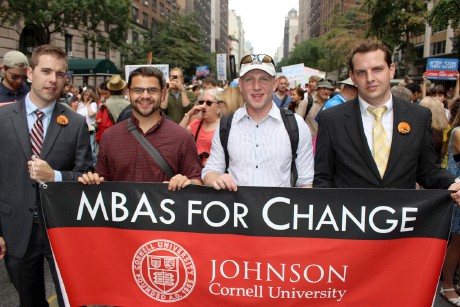 On Sunday, Sept. 21, I had the privilege of participating in the largest climate march in history. More than 400,000 individuals, including about 150 Cornell students, took to the streets of New York City in what is being called the People’s Climate March. The march united more than 1,400 businesses, schools, faith-based groups and environmentalists in an unprecedented show of solidarity, carrying the message that something must be done about climate change.

The march was scheduled to coincide with the Sept. 23 U.N. Summit on Climate Change in New York City, where 125 heads of state, including President Obama, convened to lay a framework for a binding agreement to reduce greenhouse gasses and cap global warming to an increase of 1-2 degrees Celsius. There are many opinions on how to best achieve this, including carbon taxes, investment in renewable energy, dietary and agricultural practices, and divestment from fossil fuel companies.

That diversity of opinion was the most hopeful message I took away from the People’s Climate March. The constituencies lining up against climate change are increasingly representative of the broader melting pot of political ideologies across America. Take the bus that I organized as an example: It was captained by a business student; funded in part by the Center for Transformative Action, a local nonprofit that seeks to sponsor innovative social change agents in New York state; underwritten by local environmental activists; and filled with families, Democrats, Republicans and Cornell students from a diverse set of disciplines. The issue of climate change is no longer just part of an environmentalist or liberal agenda, but something everyone can get behind, including religious, moderate conservatives like me.

Personally, I was marching as a representative of the Samuel Curtis Johnson Graduate School of Management and, more broadly, business. During the march, we met many individuals, who were appreciative of (and in some cases, surprised by) the fact that MBAs also cared about climate change. It’s true that addressing climate change will require extraordinary coordination between governments, businesses and the social sector. However, we at Johnson believe that business is the largest catalyst for change, when it comes to transitioning to a carbon-neutral economy.

Business is leading the way. How? One example is a recent power purchase agreement brokered in Austin, Texas, just hours away from Houston, a major oil and gas center. Austin Energy, the local utility, secured a solar power purchase agreement with Recurrent Energy for less than 5 cents per kilowatt hour – considerably cheaper than the price at which fossil fuel-generated electricity could be had in that market. This game-changing deal was only possible because of dedicated companies designing, manufacturing and developing renewable energy.

These are exciting times, and, despite the perilous journey ahead of us, I’m optimistic that human ingenuity and spirit will prevail. If you’d like to get more involved in the solution, Johnson has many opportunities to do so. The Center for Sustainable Global Enterprise, headed by Mark Milstein and Monica Touesnard, offers unique opportunities in research, innovative curriculum and extracurricular programming. I’ll be participating in the 2014 Johnson Energy Connection Sept. 26-27, and I encourage you to do the same. This annual event brings together the Cornell community and alumni working in the energy industry. Alumni will give short, TED-style presentations on a variety of topics relevant to the energy industry in their particular area of expertise. This will be followed by a mini-case competition Sept. 27.  I hope to see you there!

Jeremy Kuhre is a first-year MBA student, who plans to focus his studies on sustainable global enterprise, especially in the area of renewable energy. Prior to attending Johnson, he was a project manager for Sustainable Solutions Corp., a consulting-engineering firm based outside Philadelphia.