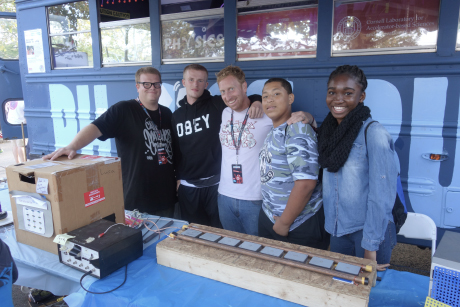 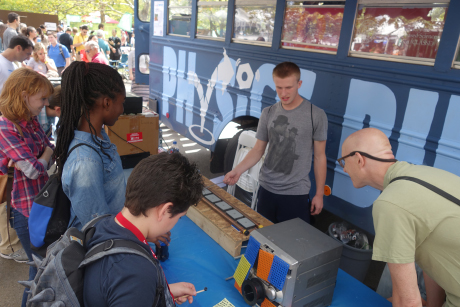 Several Cornell graduate students in the field of physics and the science outreach specialist for Xraise Cornell, the outreach program of CLASSE (Cornell Laboratory for Accelerator-based Sciences and Education) took advantage of the new Ithaca Physics Bus to showcase the work of local school-age JunkGenies at the World Maker Faire, Sept. 20-21, at the New York Hall of Science in New York City.

On its maiden voyage out of Ithaca, the Ithaca Physics Bus, whose mission is to bring science to the public, brought some 20 exhibits that students in the JunkGenies Greater Ithaca Activities Center (GIAC) afterschool program and affiliated summer camp had developed with the help of Xraise Cornell-affiliated graduate students.

Students in the three-year-old JunkGenies program “dig through tubs full of electromechanical junk, explore an artifact’s unsung essence and then create something that showcases the underlying physics – making unwanted household appliances do things you’ve never imagined possible,” said Erik Herman, the force behind the development of the Ithaca Physics Bus and the science outreach specialist at Xraise Cornell.

“Though their projects certainly seem to play tricks of perception, the magic of the JunkGenies begins before projects even take shape. Kids dive, screwdrivers and wrenches in hand, into a pile of VCRs, cassette players and old telephones – following their interest where it leads them,” said Herman. “And they come up understanding their world a little better for it. Participation is optional, nothing is graded, but the buzz of troubleshooting, experimentation and conversations reveal the higher-order thinking and the standards-worthy scientific analysis, inquiry and design that goes on through the process.”

For example, one exhibit features a mattress-inflating blower that levitates a string, a kitchen hand-mixer that maintains a standing wave in a beaded chain, and a microwave oven that lights up neon bulbs. “Projects can get as complicated as a computer speaker/cassette player/solar panel/laser pointer combo that makes light disturbances audible, or as simple as a magnet bouncing around inside a spool of wire that’s been hooked to a common AC wall adapter,” Herman added.

The Ithaca Physics Bus, funded by an Indiegogo campaign that Herman launched independently last spring, will travel to schools, parks and events with physics demonstrations and science experiments. Herman maintains and drives the bus. Two GIAC counselors brought the JunkGenie teenagers to the Maker Faire to debut their upcycled-appliance physics exhibits.

“Whether they know it or not, through this experience, the JunkGenies have gained an understanding of physics concepts, developed some practical intuitions and acquired real-world marketable skills,” Herman said. “More immediately gratifying, perhaps, is that they had a great time exploring and being creative, and they transformed something discarded into something worthy of being featured. One thing is for sure, the JunkGenies exhibits, like the Physics Bus and the synchrotron, allow people see their world a bit differently.”