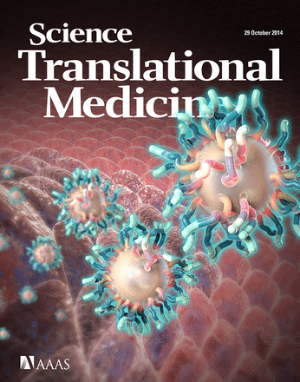 Nanoparticles designed to adhere to and light up cancer cells have reached a major milestone in their bench-to-bedside journey. A first clinical trial of these ultrasmall, multifunctional particles has deemed them safe for humans and cleared easily by the body.

The particles, called “C dots” (Cornell dots), were invented more than a decade ago by Uli Wiesner, the Spencer T. Olin Professor of Materials Science and Engineering. They have been undergoing a U.S. Food and Drug Administration (FDA) Investigational New Drug (IND) human clinical trial since 2010. The results of that study, which involved five patients with melanoma, were published Oct. 29 in Science Translational Medicine and featured on the journal’s cover.

For the trial, which has been conducted at Memorial Sloan Kettering Cancer Center (MSKCC) in New York City, the 7-nanometer particles were labeled with radioactive iodine and injected into patients with metastatic melanoma. The iodine allowed the particles to be tracked with positron emission tomography (PET). Administered under the FDA’s IND guidelines, the study showed that the particles are safe for human use and leave no trace after renal excretion – an important benchmark for any substance undergoing IND approval. The trial has been amended to include patients with brain tumors, and those patients are being recruited now.

“This has been very encouraging,” Wiesner said. “It’s the first case we’re aware of in which the FDA has approved an inorganic optical nanoparticle as an IND for a clinical trial. While this was just a safety and pharmacokinetics study, this opens the door to using these particles in real applications.”

Their intended use, as a cancer diagnostic tool, is now undergoing a separate human clinical trial at MSKCC that involves metastatic melanoma patients with head and neck lesions. That trial employs a handheld camera for surgeons in conjunction with the glowing C dots as the fluorescent probes to enable the surgeons to make better decisions about which lymph nodes to remove and which to leave in. “We are very excited about these new optical tools in the surgery room,” said MSKCC’s Dr. Michelle Bradbury, who is overseeing the trial.

C dots are silica-organic hybrid particles that consist of fluorescent molecules encapsulated in a silica core and surrounded by a silica shell, which in turn is coated with polyethylene glycol (PEG). To turn these core-shell particles into cancer probes, some of the PEG chains carry peptides that bind to overexpressed receptors on tumor surfaces. When exposed to near-infrared light, the bound particles fluoresce and serve as an optical beacon for surgeons.

Beyond their diagnostic and surgical potential, C dots also could be used as highly specific drug deliverers. By binding only to tumor cells, they would release drugs only where they are needed, rather than systemically, as with most cancer treatments today.

Though this first trial’s results were positive, Wiesner stressed that C dots are still years away from final FDA approval, as many follow-up studies are required that involve many more patients.

The study, “Clinical Translation of an Ultrasmall Inorganic Optical-PET Imaging Nanoparticle Probe,” was done in collaboration with Bradbury at MSKCC, with whom Wiesner has worked for eight years on the C dots’ surgical applications. The work was funded by the Laurent and Alberta Gershel PET Imaging Center of MSKCC.