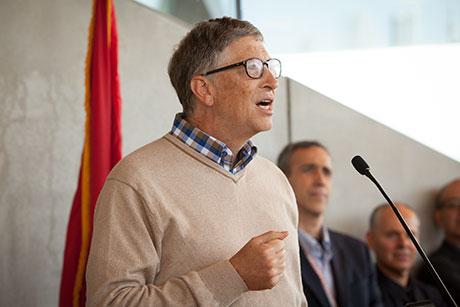 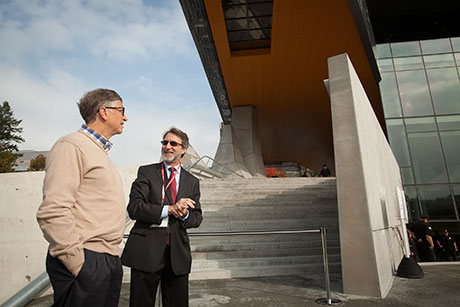 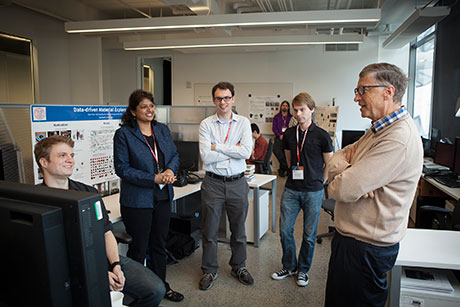 Thanks largely to the Bill & Melinda Gates Foundation, Computing and Information Science (CIS) at Cornell now has a “there.”

That’s how Haym Hirsh, dean of CIS, described Bill & Melinda Gates Hall at the building’s dedication Oct. 1. He reminded an enthusiastic audience gathered at the front entrance of the new building that the Department of Computer Science was once housed in a single floor of Upson Hall, and as CIS grew, faculty were scattered widely. Having a home is “transformative,” he said.

The array of Cornell dignitaries present was overshadowed by Microsoft co-founder Bill Gates himself.

With the dedication coinciding with the 50th anniversary of Cornell’s Department of Computer Science, Gates noted that his own interest in the field is only 46 years old. “I was only 9 years old when CS was formed,” he recalled. And it was four years later that he first learned computer programming, “stealing computer time” from a local university.

But even now, he said, “The full range of what computing makes possible has not yet been achieved.”

At the ceremony, Gates also discussed research the Bill & Melinda Gates Foundation supports in the College of Agriculture and Life Sciences to solve problems of world hunger, disease and childhood mortality. “For all of the work you’re doing here,” he said, “thank you for focusing on the problems of society.”

Cornell President David Skorton noted that more than 50 corporate and alumni donors contributed to the cost of the new building, but it never would have been built without the $25 million initial gift from the Gates Foundation. The building, he added, will become another iconic image of the Cornell campus.

Robert Harrison ’76, chair of the university’s board of trustees, said CIS research is “of critical importance to Cornell’s vision to be the land-grant university to the world.”

After the ceremony, the audience was invited to an open house. Throughout the building, CIS faculty and students had set up posters and demonstrations of their research.

Later, in the new 150-seat lecture hall on the ground floor, architect Thom Mayne reviewed his design process. With its focus on the core functions – what he called “the investment” – and repeated iterations of the design, the process would sound familiar to most computer programmers.