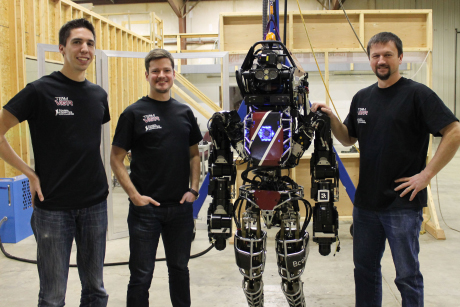 Hadas Kress-Gazit, assistant professor of mechanical and aerospace engineering; graduate student Spyros Maniatopoulos; and Roberto Villalba ’15 have joined Team ViGIR (Virginia-Germany Interdisciplinary Robotics) to compete for the top prize of $2 million. ViGIR made the top 10 teams following a December 2013 trial, earning a spot in the challenge finals in June 2015. Cornell joined the team in August.

The DRC follows on the Grand Challenge (2005) and Urban Challenge (2007), which featured a Cornell team. Its goal is to develop advanced ground robots capable of complex tasks during natural or man-made disasters, such as the Fukushima Daiichi nuclear power plant disaster in 2011.

It’s not quite at the level of Robocop running into burning buildings, but the DRC teams are trying to develop robots capable of assisting humans in responding to such disasters, Maniatopoulos said.

“What we want is to create autonomy for the robot by making provably correct robot controllers,” Maniatopoulos said. The Cornell team led by Kress-Gazit is contributing research in bringing full or partial autonomy to the robotic platform, reducing the need for human input to accomplish tasks. Robots that can make decisions and automate tasks without help at every turn could prove invaluable in disaster situations and countless other applications.

“Our research is about synthesizing controllers from high-level behavior specifications, to reduce operator overload, and to provide guarantees,” Kress-Gazit said. That includes guarantees of safe behavior and self-monitoring ability of all the robot’s systems, even in the event of human error.

Based on their sixth-place finish, they were awarded a humanoid “Atlas” robot developed by Boston Dynamics and a chance to compete in the DRC Trials in December 2013.  Their robot is named Florian, the patron saint of firefighters and rescuers. In addition to Cornell, Team ViGIR has expanded to include researchers from Oregon State University and Germany’s University of Hanover.

At the DRC finals in June 2015, to be held in Pomona, California, an untethered Florian will need to complete a series of about 10 tasks in one hour. The tasks range from opening a series of doors, to climbing a ladder, to navigating rough terrain. Before all that, it will need to drive a car. Wi-Fi will be intermittent, underscoring the need for at least some autonomy for the robot. The competition was purposefully designed to be difficult, the DRC website says, to spur innovation and shed light on the most difficult problems in robotics.