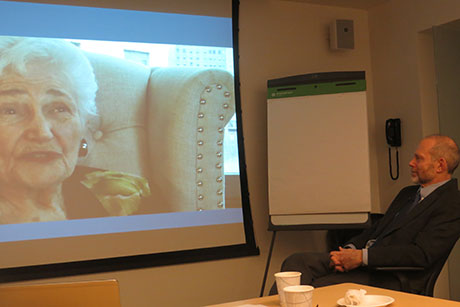 Jon Craig
Gerontologist Karl Pillemer showed a video interview with Kitty, 93, a subject in his new book, “30 Lessons for Loving: Advice from the Wisest Americans on Love, Relationships, and Marriage.” Kitty dates a man in his 80s.

Haven’t found that perfect life partner? There’s hope right into your 80s, according to a Cornell University gerontologist.

Coinciding with the release of his second book Jan. 8, Karl Pillemer, the Hazel E. Reed Professor in the College of Human Ecology’s Department of Human Development, spoke with journalists in New York City about his ongoing study of longtime marriages and a rising trend in “recoupling.”

Pillemer, director of the Bronfenbrenner Center for Translational Research, tapped into wisdom, humor and sound advice on keeping relationships alive by interviewing more than 700 people who were married an average of 43 years. The project included happily married couples, divorcees, widows and widowers, and same-sex couples. His oldest subject was 108 years old.

Their rich life experiences are detailed in the book “30 Lessons for Loving: Advice from the Wisest Americans on Love, Relationships, and Marriage.”

It is the largest in-depth study of long-married elders ever conducted, sampling couples nationwide. Pillemer shared highlights at Cornell’s ILR Conference Center in Manhattan as part of the “Inside Cornell” series.

Pillemer organized his findings into five categories: finding the right partner, learning to communicate and handle conflict, dealing with predictable stressors as the marriage unfolds, discovering how to keep the spark alive in a marriage over many years and a set of core principles for married life. 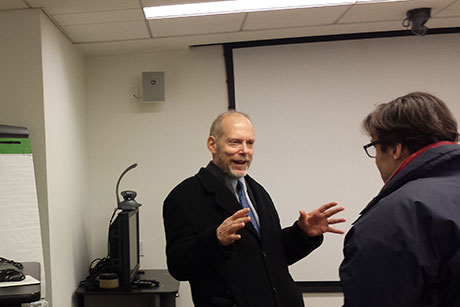 Jon Craig
Karl Pillemer chats with a New York Times reporter about his new book “30 Lessons for Loving: Advice from the Wisest Americans on Love, Relationships, and Marriage” Jan. 8 in New York City.

For instance, a woman named Kitty complained that “the young people call me a cougar’’ because her boyfriend is 88 “and I’m going on 94.” Kitty was not alone. Pillemer discovered many people remarrying or “living apart together” well into their 80s. The divorce rate is rising rapidly among people in their 50s, he said, and people are living much longer, so there are more people who “recouple” during the second half of their lives. “The recoupling is increasing,’’ he said. “It was surprising how many had found a new partner.”

Pillemer cited the proven success of regular “date nights” during the child-rearing years and the importance of maintaining intimacy: “This is a part of life that grows and expands.”

He also was surprised to find high rates of well-being. He kept meeting happy, vibrant people. Again and again, Pillemer heard advice like this: “Don’t give up too easily. Be sure to sit down and work it out. Open up. Keep a sense of humor. Hang in there when it gets tough. Don’t expect things to happen overnight. Realize the marriage can grow and become more beautiful.”

Provided
Cornell gerontologist Karl Pillemer discusses some of the sage advice and great stories he heard in reseearching his new book.

Friendship is as important as love, and physical attraction is crucial to sustaining relationships. Loving partners thrived when they had mutual interests, could hang out together and maintained their ability to converse freely. Many repeated this age-old advice: “Give up trying to change your partner (and) don’t go to bed angry.”

Among his other findings:

Another recurrent suggestion: “Don’t get married too soon. Make sure you find the right person. Wait if you are the least bit uncertain.”

“Love at any age is terrific,” Pillemer concluded. “Don’t be afraid of it.”