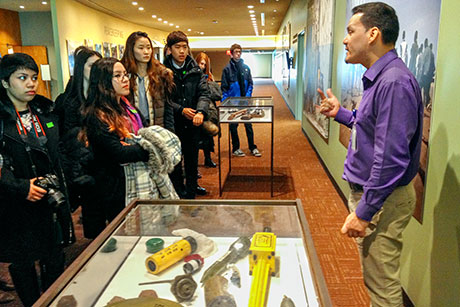 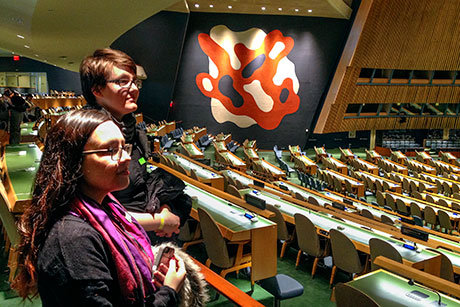 “It’s a very natural thing for the United Nations to work on,” Daniel Thomas, of the U.N. Secretary-General’s Climate Change Support Team, told the Cornell group. “Climate change crosses all borders and all nations. This is an urgent issue. This is a long-term challenge.”

The Cornell students also heard from Nuria Felipe Soria, a communications specialist with UN Women, who provided an update on gender equality and empowerment of international women’s issues. Mattias Klettermeyer, of the U.N. Department of Social and Economic Development, explained the “Post 2015” Millennium Goals agenda; and David Michael Kelly, from the U.N. Office for the Coordination of Humanitarian Affairs, gave a current affairs overview.

About 86 undergraduates, graduate students and academic fellows toured the United Nations. The Cornell group reflected a wide array of cultures from 29 different countries, ranging from Brazil to Ghana, from Costa Rica to Ethiopia and Korea.

This 11th annual trip to the U.N. was organized by N'Dri Assié-Lumumba, professor of African/Diaspora education at the Africana Studies and Research Center in the College of Arts and Sciences; and Theoria Cason, the resident hall director of Ujamaa. “Its purpose is to inspire and provide an opportunity for students to appreciate a diverse and complex world with a shared humanity,” Assié-Lumumba said.

Reflecting on the trip, Sia Kwimbere ’18, who hails from Tanzania, was heartened that the U.N. will continue addressing learning and literacy around the world. “There needs to be more quality primary education – we need universal primary education,” she said.