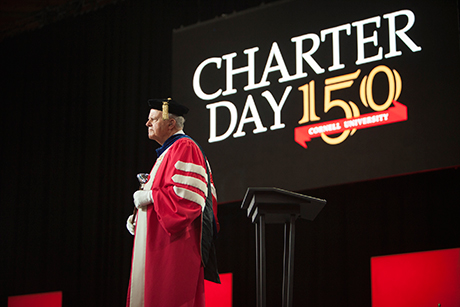 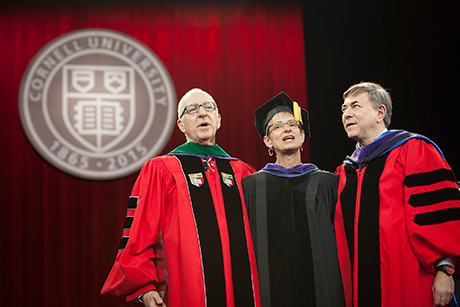 Jason Koski/University Photography
From left, Cornell President David Skorton, President-elect Elizabeth Garrett and Robert Harrison '76, chairman of the Cornell Board of Trustees, lead the Cornell Chorus, Glee Club and guests in the singing of the alma mater at the conclusion of Charter Day ceremonies April 27 in Barton Hall. 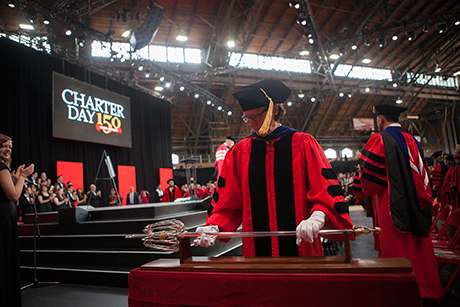 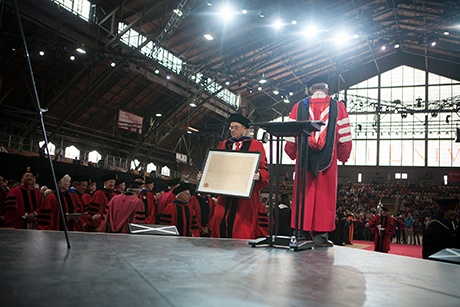 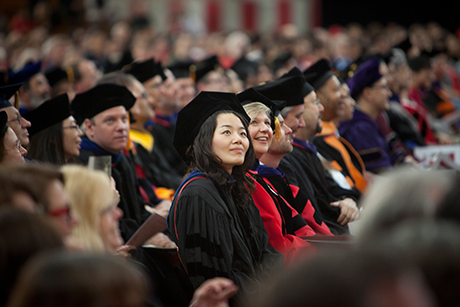 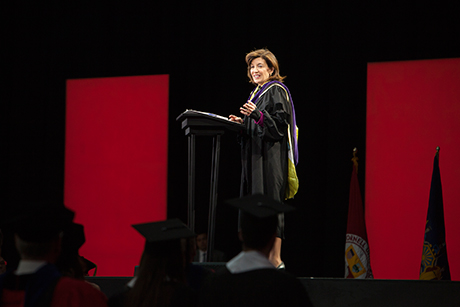 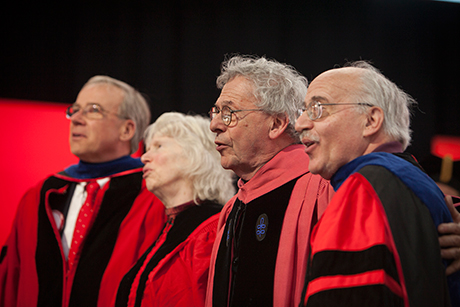 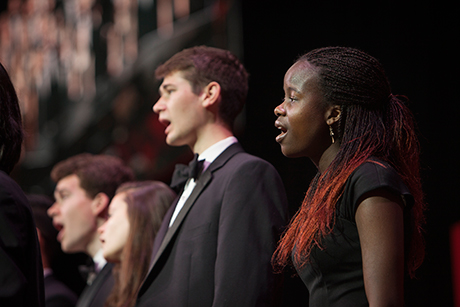 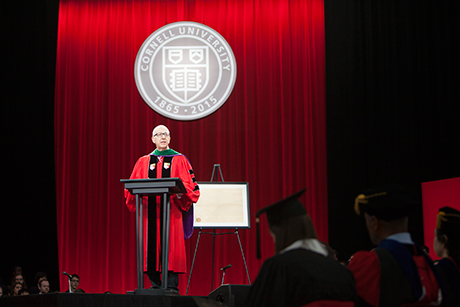 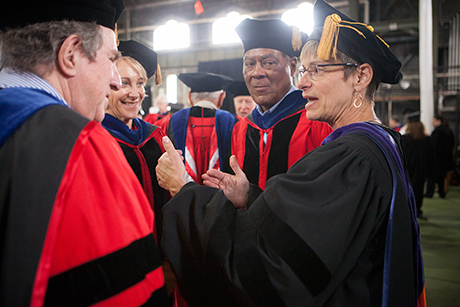 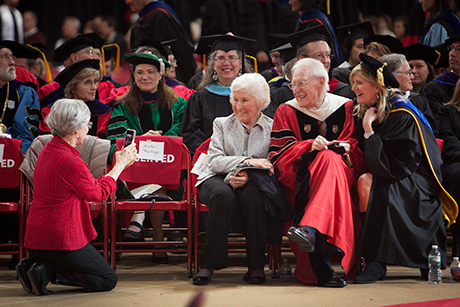 Marking 150 years to the day when then-New York Gov. Reuben Fenton signed the charter to create Cornell University, thousands gathered in Barton Hall April 27 to celebrate a century and a half of transforming American higher education and the university’s impact on New York state, the United States and the world.

The ceremony, attended by nearly 4,000 people, began with an academic procession of 450 faculty, administrators, staff and students.

The sesquicentennial video, “Glorious to View,” debuted on two large screens flanking the stage. In soaring, breathtaking visuals that traveled over and through the Ithaca, New York City and Doha campuses, punctuated by testimonials from faculty, alumni and students, the university was described as a transformative force for education, outreach and research.

U.S. Supreme Court Justice Ruth Bader Ginsburg ’54, appearing in the video, recalled her European literature professor, Vladimir Nabokov, as one of the most influential teachers she ever had. “That man changed the way I read; he changed the way I write,” she said, noting that even today, when she writes opinions, it is Nabokov’s lessons she recalls when she thinks about the order of her words.

Robert Harrison ’76, chairman of the Cornell Board of Trustees, emceed the program. “We have such a vast and varied Cornell community,” he said, “easily 270,000 people strong.” He said the four-day Charter Day Weekend “Festival of Ideas marks the culmination of nine months of celebration here on campus and around the world.”

Regional events, beginning in September in New York City, “tied the Cornell family together across the years” and led to Charter Day Weekend, where “we renew our pride at home in Ithaca by celebrating the profound academic, scientific, artistic and social accomplishments of this great university,” he said. “It is the perfect capstone to an historic year.”

From the beginning, Cornell’s instruction combined the best of classical and practical education, Harrison said, “and we adopted an overtly public mission. This combination of access, breadth and engagement is what we recognize today as the shape of the modern research university.”

University Archivist Elaine Engst, M.A. ’72, told the story of the bill introduced into the New York State Senate that established “the Cornell University.” The charter, which established the legal and financial base of the university, also provided the blueprint for “the radical educational experiment that would become Cornell University,” she said.

The charter established that all subjects be treated equally and set up Cornell as the land-grant institution for New York state for “the cultivation of the arts and sciences, literature, agriculture, the mechanic arts and military tactics and in all knowledge.”

“These ideals continue to define Cornell’s educational mission,” Engst said. She described the founders’ commitment to a nondenominational university and the commitment to education and instruction for all, regardless of gender, race or national origins.

The Charter Day address was delivered by Lt. Gov. Kathy Hochul, who noted that while Gov. Fenton signed the charter in 1865, a few years later he decided against attending Cornell University’s inauguration day ceremonies because he feared criticism by those who considered the young university a “godless institution.” Fenton “sent his lieutenant governor to fill in for him,” Hochul said to laughter.

Hochul said the university “was a trendsetter, not afraid of criticism for its novel concept, so unique in its day. [It was] unafraid to forge its own path and chart its own destiny.”

“Because of Cornell, this area has become a beacon of progressive thought, and has had a profound impact on our political discourse and landscape,” she said.

She noted Cornell “has impacted all corners of the Empire State, from Wall Street to Main Street.” Cornellians “take such an expansive, multidisciplinary approach to not just problem-solving, but to living life.”

She credited Cornell’s land-grant mission for much of New York state’s sustained economic growth in the past century and a half, and noted some research and study Cornellians conduct right now – from studying organic phosphorous in upstate lakes to new innovations to help farms be more productive.

“Cornell was an ideal born in one of the most tumultuous months in our nation’s history,” Hochul said. “A civil war had just ended and questions remained: Would the fragile peace last? A president was assassinated – would the young democracy survive? A new, radical concept in higher education was born in our state capital – but would it endure? … our nation, our state and this institution have done much more than endure and survive. Each has taken its place elevated above its peers.”

Altschuler and Kramnick (who co-authored the book “Cornell: A History, 1940-2015”) contrasted White – a Yale-educated, well-traveled former professor of history, with Cornell, an older, self-educated farmer and tinkerer who barely eked out a living for decades before making his fortune in the development of the Western Union telegraph company.

“So different in background and temperament, these two men, who sat together as members of the New York State Senate, ultimately agreed on fundamental and revolutionary principles for higher education in the United States,” Altschuler said.

After tracing the university’s lasting balance of practicality and intellectual rigor, and the pairing of freedom and responsibility through the decades, they said Cornell must continue to help us understand and address the challenges of this and future generations.

And so, Kramnick said, “just as they were at the university’s 1868 opening, Ezra Cornell’s words remain true today: ‘We have not invited you to see a university finished, but to see one begun.’”

He emphasized Cornell’s historic, ongoing ties with the local community.

“Ithaca has always played a vital role in Cornell’s success, always will, and we continue to strengthen that partnership day by day,” he said.

The sesquicentennial has provided an opportunity to reaffirm the values that give the university its unique character while also looking to the future, Skorton said. From Cornell Tech to new directions in graduate and undergraduate education, the university’s curriculum continues to evolve.

Skorton spoke about Cornell’s enduring aspects and its durable values – from a commitment to student access, financial aid, diversity and global experiences to faculty excellence and the good that graduates do in the world.

The future holds “opportunities aplenty for Cornell to lead – in its teaching, its research and creative work and its public engagement, over the next 150 years,” he said.

“We can look ahead to our pre-eminent, if still imperfect, university, a great and noble enterprise where ideas matter, where individual lives are transformed, where the seeds of positive change are sown,” Skorton said. “Happy birthday, Cornell, and here’s to another remarkable 150 years.”

Skorton, who steps down as president June 30 to become secretary of the Smithsonian Institution in Washington, D.C., invited President-elect Elizabeth Garrett to the stage; they and Harrison led the singing of the alma mater, accompanied by the Cornell University Wind Symphony, Chorus and Glee Club.

Cornell Chronicle coverage of the sesquicentennial