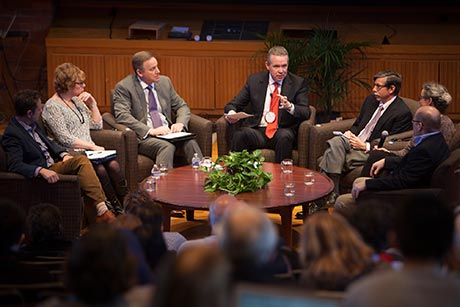 Deliberating security and a sustainable future, six professors from several disciplines offered realistic quick-takes on destiny – and how our society adjusts.

Guided by John Toohey ’84 – also known as John Morales, chief meteorologist for WTVJ-TV in Miami – the topics in the Charter Day Weekend event, “Is the Future Secure and Sustainable?” varied from water security and the California drought to computing, Internet privacy, automobiles and rail transportation.

When asked what would happen if America’s cyber systems all were hacked simultaneously, Fred Schneider, chair of computer science, replied, “No more email,” which drew laughter. “It could happen. We have built a cyber infrastructure out of screen doors, and it is easy to penetrate them.”

Schneider explained how identity theft occurs. “Building systems that were secure was never an important factor, as we all have a thirst for functionality,” he said.

On California’s current drought, Susan Christopherson, chair of the Department of City and Regional Planning, said: “California has always underpriced the cost of water and particularly for the farmers. So there were never any incentives … to go toward – for example – Israeli methods of drip irrigation.”

She continued: “There have always been droughts in California, because that’s … [the] kind of climate. It’s worse this time. The question now is going to be moving toward a situation where agriculture is paying for the true cost of water.”

Following on Christopherson’s thoughts, Rebecca Nelson, professor of plant pathology, discussed similar problems in India, which suggests a need for policy incentives to save water.

Nelson said U.S. agriculture has benefited from nearly optimal conditions, unlike in other parts of the world. “Africa never had that advantage … with shockingly low use of fertilizer and other inputs,” she said. To save water and grow successful crops, “We could learn lessons from farmers in Africa, organic agriculture, theory and modeling – to improve [the efficient use of water] and to deal with increasingly stressful conditions,” Nelson said.

Moving to transportation, Rick Geddes, associate professor of policy analysis and management, talked trains: “My perception of our railroads is that we’re stuck in the 20th century and we really don’t want to leave it.”

Geddes believes in a positive future for passenger trains. “We need to make that Northeast corridor really a showcase. The United States can do reliable high-speed passenger rail,” Geddes said. “We need to separate the Northeast corridor from the rest of the Amtrak system” and allow competitive bids from international companies who have expertise. “They can show it can be done well.”

Pat Reed, professor of civil and environmental engineering, discussed many topics, but while the panel focused on social media and Internet privacy, the professor provided fresh insight. As opposed to older generations, current students have starkly different attitudes toward social media and the world. Reed said that his students don’t believe in stability.

Consistently, Reed explained, “prior generations believed in the fallacy of stability. And there is a dream that there aren’t catastrophic events – and that [this generation needs] social media and interconnectivity because they don’t feel [the stability].”

Jeff Hancock, chair of Information Science and professor of communication, discussed communicating via social media. In eras before modern technology “we’d never be able to talk to each other if we weren’t in the exact same place at the exact same time,” he said.

Hancock said he feels optimistic about young people and their sense of and use of technology: “When you see young people on the street, the majority are communicating with other people. Our brain is designed to be social, and we’re allowing our brain to do what it needs to do.”

New media has produced more human communication. “The explosion in writing is astounding,” Hancock said. “Young people are writing more words today than in most of human history. They’re doing … more writing than most of our forebears ever did in their whole lives.”