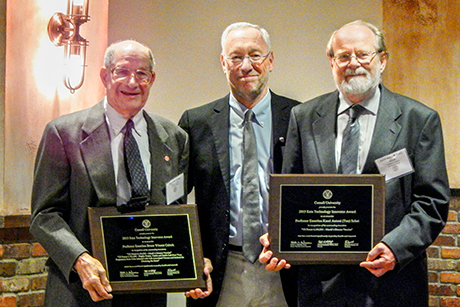 Two Cornell professors emeriti of veterinary medicine have received the 2015 Ezra Technology Innovator Award for their work as co-inventors of the Marek's disease vaccine. Currently, 22 billion doses of vaccines that treat various strains of Marek's disease are administered annually to chickens in commercial production, of which Cornell’s vaccine is the most used.

The innovator award is given every two years to recognize inventors whose technologies have been widely used in products and services, achieved significant social impact and generated financial returns for Cornell.

During the event, Cornell also recognized inventors who have contributed to more than 200 licenses to industry within the past two years.

"We try to recognize inventors whose technologies have made a big societal impact that touch people’s lives," said Alice Li, interim executive director of the Center for Technology Licensing at Cornell University (CTL). "At Cornell, it is part of the mission that, along with education, the research we do has an impact in society."

Marek's disease is found in virtually all commercial chicken-producing areas around the world. It causes tumors in the nervous system and other internal organs. To combat this disease, veterinarians and poultry farmers administer billions of doses of Marek's disease vaccines annually. A majority of these vaccines contain the SB-1 strain isolated by Calnek and Schat and patented at Cornell.

The vaccines have decreased mortality in flocks to just 1-2 percent today from 25 to 30 percent (and occasionally as high as 60 percent) prior to the vaccine's invention. That 1-2 percent mortality rate still translates to $1 billion to $2 billion in poultry losses each year.

Calnek joined the Cornell faculty in 1961 and was named chair of the Department of Avian and Aquatic Animal Medicine in 1977, a position he kept until his retirement in 1995. He has published numerous book chapters, more than 150 scientific papers and has received many national and international awards.

Schat received a DVM degree from the State University, Utrecht, Netherlands, in 1970, before he pursued his Cornell degree. He has been a key researcher in the study of highly pathogenic avian influenza H5N1 strains and has published more than 40 book chapters and more than 170 papers. He also has received numerous prestigious awards and honors.

This is the fourth Ezra Technology Innovator Award to be presented. Those who have been honored are: Watt Webb, professor of applied physics and the S.B. Eckert Professor in Engineering, in 2009; Francis Barany, professor of microbiology and immunology at Weill Cornell Medicine, in 2011; and Ray Wu, the late Cornell professor of molecular biology and genetics, given posthumously in 2013.

The awards are administered by the CTL and supported by the Office of the Vice Provost for Research.