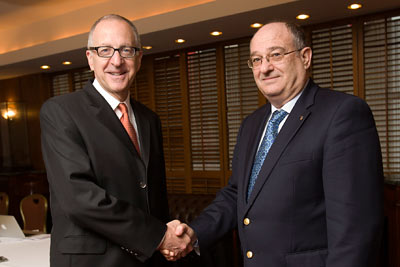 The NYC Tech Campus on Roosevelt Island will combine the full spectrum of both institutions' academic strengths, as well as Cornell's entrepreneurial culture and deep connection to the city's emerging tech sector and the Technion's global leadership in commercialization and technology transfer. This partnership will transform New York City into a world hub of innovation and technology commercialization.

"By joining forces in this groundbreaking venture, our two great universities will employ our demonstrated expertise, experience and track record of transforming new ideas into solutions to create the global avenues of economic opportunity and tech leadership that Mayor Bloomberg envisions," said Cornell President David Skorton. "The Technion is the driving force behind the miracle of Israel's technology economy. Its academic rigor in computer science and engineering and its leadership in technology transfer has helped create one of the largest concentrations of startups anywhere and attracted the world's leading technology companies to Haifa to leverage Technion's research and its outstanding graduates."

"We are very proud of the many strengths we bring to this endeavor, and we are excited to be a partner with another of the world's great research universities," said Technion President Peretz Lavie. "Cornell's globally recognized research and graduates are fueling new technologies and innovative startups at the center of New York City's current tech boom. Cornell is uniquely positioned by its deep connection to the city's emerging tech sector to serve as a catalyst for the creation of new technologies, jobs and industries in New York City."

The key attributes of the partnership between Cornell and the Technion underscore the distinctive and practical dimensions of the proposed NYC Tech Campus and its specific focus on strategies to spur innovation and commercialization. An integral part of the campus will be the Technion-Cornell Innovation Institute (TCII), a 50-50 collaboration between the two universities to form a graduate program that will focus on commercialization of immediate relevance to the city's economic growth. Second, the campus's academic hubs will provide an interdisciplinary environment to better prepare students for careers in tech companies, large and small, where the problems to be solved involve using technical knowhow and also expertise in other domains at the heart of the city's key industries. Finally, for their degrees, students will be required to take courses that prepare them to be entrepreneurs and early stage investors, fueling the rapid expansion of the tech ecosystem in New York.

The partners will be joining in a full-scale campus -- not a satellite of either school -- to open in 2012, initially in either leased space or existing Cornell facilities in New York City. The NYC Tech Campus will eventually grow to more than 2 million square feet on Roosevelt Island, accommodating, at full build-out, nearly 2,000 graduate students and 250 faculty, as well as visitors and corporate researchers. Cornell and the Technion will collaborate in teaching, educating and advising students. The sustainable campus will include academic and commercialization space, as well as housing and community gardens.

Initially, the NYC Tech Campus will offer Cornell degrees in technical fields such as computer science, electrical and computer engineering, and information science, but the academic programs for these degrees will have unique interdisciplinary requirements related to each of the campus's academic hubs. Once the proper New York state approvals are received, students also will be able to pursue a dual degree from both the Technion and Cornell. These programs will provide students with an unparalleled breadth of studies from which they may choose.

More details of the partnership will be outlined in the universities' proposal to the city, due Oct. 28, said Presidents Lavie and Skorton.

"I launched Qualcomm's first international R&D Center in Haifa, Israel, in 1992, staffed entirely with Technion graduates and purposely located near the campus to take advantage of its great education and research," said Irwin Jacobs, the founding chairman and CEO of Qualcomm. "Technion, with its many contacts, was a great help in our subsequent worldwide expansion. The Technion's demonstrated success in translating basic and applied research to job creation complements Cornell's deep academic strengths and translational activities, providing an extraordinary partnership for the benefit of New York City. Technion and Cornell, working in close collaboration on the new campus, will inspire a next generation of entrepreneurs to pursue innovations by forming startups and expanding existing businesses."

Technion is a global leader in applied research, technology transfer and commercialization and a major force behind Israel's emergence as the home of one of the greatest concentrations of high-tech startup companies anywhere in the world. In partnership with a strong community of incubators, private investors, venture capitalists, angel groups and entrepreneurs, the Technion's tech transfer arm, Technion Technology Transfer (T3), has filed 300 average annual patents and nurtured scores of innovative startups in sectors such as clean-tech, cell therapy, drug delivery, nanotechnology and others. Companies including Intel, Google, Microsoft, IBM, Qualcomm, Broadcom, Yahoo! and Hewlett-Packard have established their operations near or on the Technion campus, where they can take advantage of the Technion's research power and outstanding students and graduates.

Technion graduates head 59 of 121 Israeli companies on the NASDAQ, and these companies have a combined market value of over $28 billion. More than 70 percent of Technion graduates are employed in the high technology sectors that drive Israel's economic growth. Today, Israeli companies headed by Technion graduates employ 85 percent of Israel's technical workforce. And the Technion also has an established presence in New York City with the American Technion Society (ATS), which maintains a national network of thousands of alumni and supporters and has raised more than $1.65 billion since its founding in 1940, the majority raised in the last decade.

Cornell is known worldwide for its top programs in engineering and computer science, and for its interdisciplinary approach to technology that spans fields from the social sciences to the arts and humanities. Cornell's entrepreneurial culture and deep connection to every aspect of New York's tech sector -- startups and entrepreneurs, existing industry leaders, and venture capital -- will make the NYC Tech Campus uniquely positioned to serve as a catalyst for the creation of new technologies, jobs and industries in New York City.

Cornell's portfolio in New York City includes the world-class Weill Cornell Medical College -- where Cornell is now engaged in a $1 billion capital project that includes construction of a new state-of-the-art medical research facility -- as well as Cornell Cooperative Extension-New York City, Cornell's Industrial and Labor Relations in NYC in Midtown and its Architecture, Art and Planning Center in Chelsea, Cornell Financial Engineering Manhattan off Wall Street, Cornell-sponsored Food and Finance High School on the West Side, and various programs in disciplines ranging from labor and employment law to human ecology. The city is now home to almost 50,000 Cornell alumni -- including thousands already working in the tech sector -- and about 5,000 Cornell employees.