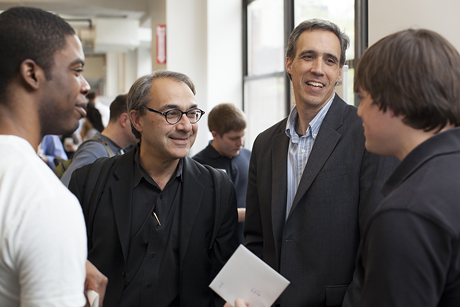 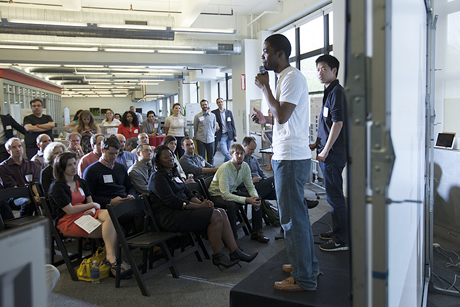 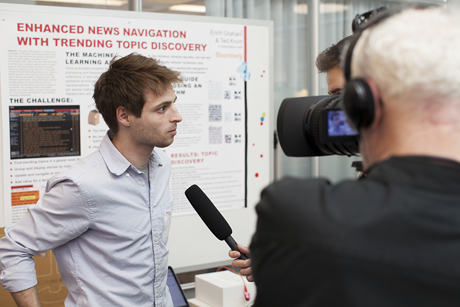 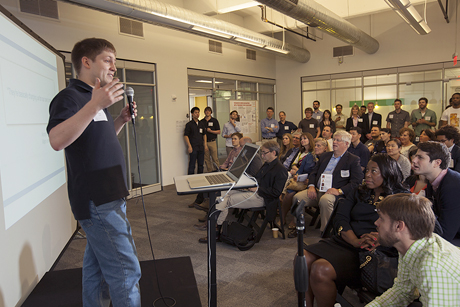 From its inception, Cornell NYC Tech officials have billed the new campus in New York City as a reinvention of graduate high-tech education – everything from its pedagogy to its students’ interaction with industry professionals would set it apart.

On the afternoon of May 10, Cornell Tech’s seven-member “beta” class of computer science Master of Engineering students offered a glimpse of that reinvention. Close to 100 guests from Cornell Tech’s industry affiliates including Google, Betaworks, Qualcomm and Bloomberg, attended an “open studio” at the Google building in Chelsea, where Cornell Tech is occupying donated space until its permanent home on Roosevelt Island is built.

Students recapped semester-long projects they completed with industry partners, and made pithy, jargon-free pitches, as if before potential investors, on products they’ve been developing. The pitches ranged from optimization of online advertisement blockers and software to enhancing the experience of Massive Online Open Courses (MOOCs).

Thanking the attendees and calling them Cornell’s Tech’s “support system,” Dean Dan Huttenlocher said the open studio was an “important piece of reimagining graduate education for the information age.”

“Communication about what you’re doing is as important as the technical skills to do the work,” he said.

Students Erich Graham and Alex Kopp pitched MOOOH – Massive Open Online Office Hours – to improve the academic outcomes of MOOCs. MOOCs are exploding in popularity but suffer from heavy dropout rates – only 10 percent of enrolled students finish the courses, Graham said. MOOOH would offer a fee-based interface in a MOOC platform that would enable efficient online interaction between professors and students.

Greg Tobkin pitched a product called Adfilter that acts as an enhanced ad blocker – a browser extension that allows people to choose what ads they see on the Internet. Classmates Andrew Li ’12 and David Jiang also worked on Adfilter.

Alfred Nelson and Jiang presented their co-op capstone project, in which pairs of students were assigned to an industry partner to work on a particular problem proposed by the company. They created a new editing tool for Tapestry, a product of the company Betaworks, which makes “tappable” stories for mobile devices.

Nelson and Jiang said their first two ideas were roundly rejected by their Tapestry team leaders. They ended with a demo of “Tap Kingdom,” a storyboard for children with colorful dragons, princesses and customizable thought bubbles.

Other presentations included Li and Kopp’s project with Google using machine learning to improve the effectiveness of severe weather alerts, and Nelson and Ted Krum’s pitch of Mychannel, a PC software-based service that creates television playlists based on users’ viewing habits.

Everything from the nature of the projects to the feel of the space was a break from academic tradition. After the presentations, guests wandered from poster to poster, asking questions and chatting. The preferred attire was casual. A bright expanse on the third floor of Google’s building, Cornell Tech’s workspace features large windows overlooking Eighth Avenue, with a classroom and computer lab on one end and low-walled cubicle clusters on the other.

Creating an academic program like this is much like founding a company, said Rajit Manohar, associate dean and professor at Cornell Tech. There are even legal issues to tackle. Law student Daniel Doktori, Cornell Tech’s self-described “micro legal intern,” spent a few weeks on campus drafting approaches to streamlining intellectual property agreements when students work with companies.

The startup enterprise continues next semester, when a number of new students will matriculate into the program, according to Cornell Tech Vice President Cathy Dove.

During the open studio, Huttenlocher also recognized Nelson and Kopp, who transferred from the computer science program in Ithaca in January and will graduate with their master’s degrees later this month.