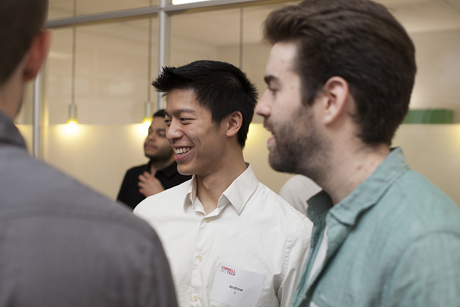 Robert Barker/University Photography
Andrew Li '12 came to Cornell Tech after getting his bachelor's in computer science from Cornell. 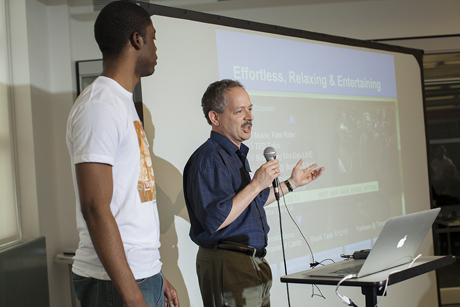 Robert Barker/University photography
Ted Krum, right, had a 20-year career in investment management before coming to Cornell Tech. Alfred Nelson, left, will graduate this month and has secured a job in Atlanta. Here they present a joint project called Mychannel during the May 10 open studio.

NEW YORK — The paths that brought them here were diverse, but the small group of Cornell NYC Tech students who just finished the school’s inaugural semester have much in common: They were attracted to the program’s startup feel, and they wanted to take part in a trailblazing master’s degree program.

“I was expecting some bumps along the way, but the idea of being literally the first students to graduate from this was a pretty big part of my decision to transfer,” said Alex Kopp, who came to Cornell Tech after one semester at Cornell’s Ithaca campus. Kopp will graduate with his Master of Engineering in computer science this month.

After a 20-year career in investment management, Ted Krum was seeking a new challenge and found Cornell Tech. Now he’s moving toward a new career in health care data analytics. “It’s been very exciting to be at the ground floor of something this big,” Krum said.

After getting an undergraduate business degree in 2008 from the University of Michigan, Erich Graham worked in the finance industry but was always drawn to high tech. He’d founded his own tech startup during college and was itching for more inspiration.

“I feel now that if I have an idea, I can see an avenue toward launching a company because of … this program,” Graham said. “I have that support structure and learning how to execute those ideas that I wouldn’t get anywhere else.”

Friday practicums moderated by Greg Pass, founding entrepreneurial officer of Cornell Tech, allowed the students to interact with entrepreneurs in the arts, nonprofits and software, and with venture capitalists.

Andrew Li ’12, who earned his bachelor’s in computer science from Cornell, was drawn to Cornell Tech well before it existed. As an undergraduate in 2011, he began reading on Facebook about Cornell’s bid to build a tech school in New York. He remembered being “jealous” of the students who would get to join that first class. But after starting a job developing software at a bank, the school began accepting applications, and he jumped at the chance to join the beta class.

“I couldn’t have asked for a better way to learn,” Li said. After just one semester, he has developed a “mindset for innovation.” “I don’t know specifically what I’ll be doing in the future, but my mind has been trained to think like an entrepreneur,” he said.

Auburn University graduate Alfred Nelson, who, like Kopp, transferred after one semester in Ithaca and will finish his degree this month, agreed that applying a mindset is a key takeaway for him.

“A lot of it comes down to simply being able to walk into a place with many talented people, looking around and seeing what they do,” Nelson said. “Having that experience directly with a team … working hard to make a product they care about – that whole aspect is something you can’t learn in the classroom. It’s inspiring.”

Said Graham, these past five months have “been the hardest I’ve ever worked in my entire life.”

“I’ve been surrounded by so many people who are brilliant and also very driven,” Graham said. “And I’m just really happy to be a part of the program.”