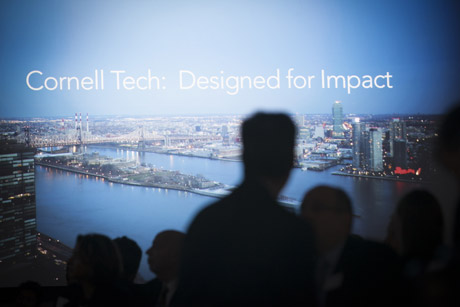 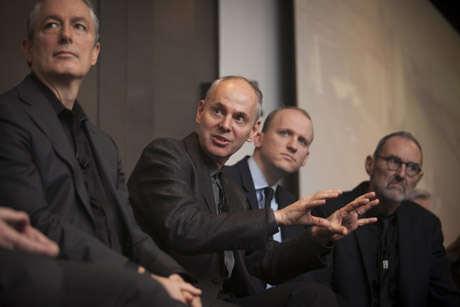 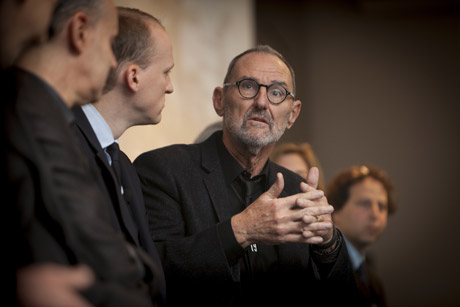 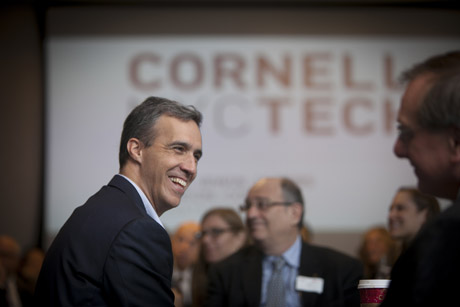 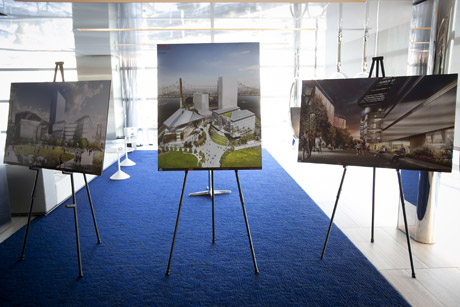 New renderings of the future Cornell NYC Tech campus are displayed at a panel discussion on the campus's design, at the Apella at Alexandria Center, which overlooks the East River.

NEW YORK CITY — In keeping with its promise to transform graduate tech education, Cornell NYC Tech’s physical presence in New York City – the design, form and function of its Roosevelt Island campus – will also be like no other.

A Dec. 19 panel discussion outlined the vision for Cornell Tech’s permanent home, slated for groundbreaking in early 2014. The event opened with a video that featured renderings of the new campus, the first phase of which should be completed by 2017. Afterward, President David Skorton met with Mayor Michael Bloomberg to officially sign the lease for the city land where the new campus will be built.

All the key players in Cornell Tech’s design, including architects, master planners and developers, came together to discuss their shared vision for Cornell Tech’s physical space, and how those plans are driven by the academic vision of its leaders.

“Connectivity, really at every scale” – from how building designs will generate intellectual connectivity among students and industry, to how the new campus will connect with the rest of the city – was the day’s theme, said moderator Vishaan Chakrabarti, the Holliday Professor of Real Estate Development at Columbia University.

A planned corporate co-location building, for example, will bring established companies, startups, students and faculty under one roof, and will be designed with flexible, open floor plans and common spaces to facilitate interactions.

“In many ways, [the corporate co-location building] carries the whole DNA of the ambitions of this campus and Cornell,” said Marion Weiss, co-founder of Weiss/Manfredi, the building’s designer. With views from Manhattan to Queens, “in one nucleus, there is a capacity to catalyze all kinds of dialogues that never existed before,” Weiss said.

This is in keeping with the transformation that Cornell Tech represents, from “specificity of spaces” – designed for particular functions – to flexible, nonspecialized spaces, said Thom Mayne, founder of Morphosis, which is designing the first academic building. He used the “Starbucks analogy” – students working on laptops – and spaces needing to reflect that style, he said.

Nor will learning stop at day’s end, said Gary Handel, president of Handel Architects, which is designing the residential building – “tech res,” they’re calling it. Not only will it be state of the art in energy efficiency and indoor air quality, it will also be a place where intellectual interactions can continue after hours, and where faculty will actually want to live with students.

But amid this sense of collaboration and openness, Cornell Tech’s spaces are carefully planned in accordance with the pedagogical needs of the new campus, said Kent Kleinman, dean of Cornell’s College of Architecture, Art and Planning.

Computer scientists, engineers and entrepreneurs will collaborate with faculty in studio spaces, rather than just classrooms, Kleinman said. Undergirding these new spaces, he said, “is a different pedagogical philosophy,” in which students, with faculty and industry collaborators, will “determine what the problems are and then form teams” to solve them, Kleinman said.

Mayne explained that the campus’s first academic building aspires to be net-zero, or slated to produce as much energy as it uses. This will be achieved via a “lily pad” effect, Mayne said, referring to an array of photovoltaic cells covering the roof of the building.

The vision for the building, Mayne said, is “radically performance-driven.”

Other panelists who spoke on the theme of connectivity were James Corner, principal of James Corner Field Operations, in charge of the landscape of the new campus; Colin Koop, senior designer at Skidmore, Owings & Merrill, responsible for the campus master plan; Michael Manfredi, co-founder of Weiss/Manfredi; and Andrew Winters, director of capital projects and planning for Cornell Tech.

The panel was co-sponsored by Cornell Tech and the American Institute of Architects.