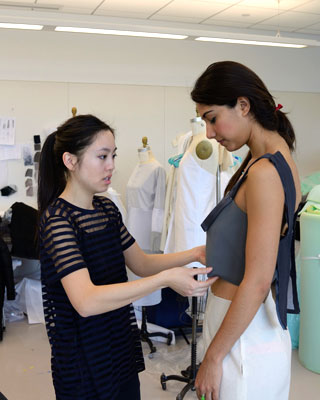 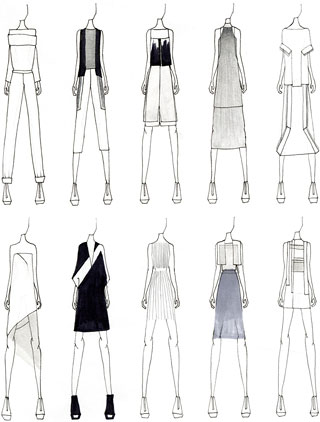 Now in its 30th year, the Cornell Fashion Collective (CFC) runway show – one of the university’s oldest and biggest student-run events – is getting a makeover.

New to this year’s show, set for Saturday, April 12, 8 p.m., at Barton Hall, will be a women’s plus-size collection, a young girls’ line modeled by local children, and a selection of fiber science creations, including athletic gear that changes color in response to the wearer’s body temperature and futuristic, laser-cut neoprene bodysuits that will dazzle the runway thanks to electroluminescent wires and tape and embedded miniature LEDs.

Altogether, 50 designers are expected to send as many as 350 looks down the runway, most of them modeled by Cornell students, according to Alix Cantor, CFC president and a fashion design management senior in the College of Human Ecology.

“It will be our most eclectic show yet,” Cantor said. “We have a diverse group of designers and students working nonstop to put on a great show.”

Among the fashion designers will be Justine Lee ’14, recipient of a 2014 Geoffrey Beene National Scholarship from the YMA Fashion Scholarship Fund. Lee said her contemporary womenswear collection of dresses, pants and tops will explore tensions between “solidity and transparency, and darkness and lightness.”

Her minimalist line, Aya, will open with a model dressed in black; the color will gradually dissipate from gray to white with each of the nine looks. Lee experimented with laser cutting, needle punching and layering diaphanous fabrics, an effect that will “make the clothes virtually disappear” on the last model, she said.

To light up the stage, a team of undergraduate and graduate fiber science students are partnering with Toronto-based Myant Capital Partners, which specializes in smart fabrics. The students’ sleek bodysuits that illuminate at the push of a button should evoke the glowing gear of the Tron films, according to lead designer Eric Beaudette ’16.

“We are experimenting with what wearable technology of the future might look like, a time when humans and our computers will be more closely integrated,” said Beaudette, who developed the pieces with Lina Sanchez-Botero, a doctoral student in the field of fiber science.

Beaudette and a second team will show thermochromic activewear featuring fabric inserts dyed with pigments that change color in response to temperature variations. Like a warning light for an overheated engine, the pieces could signal runners to slow down when their core temperature rises too high. Beaudette’s collaborators are Ariana Levitt ’15, Sarah Meyers ’16 and Alicia Potuck, a graduate student in the field of chemistry.

Brandon Wen ’15 is solving a different challenge: how to design for plus-size women, a group often overlooked by traditional labels. Wen was inspired after constructing a plus-size mannequin for a class project last year, and now he is planning five pieces based on the “beautiful” shapes and contours of larger women, which Wen said “give us new ways to think about bodies and clothing overall.”

A smaller set of models will grace the runway for designer Smruti Mahapatra, a graduate student in the field of apparel design. Noting the “huge potential” of the growing childrenswear market, she’s creating seven pieces for girls ages 6-14 that incorporate memories from her childhood.

From its origins as a quiet event in Willard Straight Hall in the 1980s, the runway show has grown into a can’t-miss Cornell event, said CFC adviser Anita Racine. Among those in the crowd will be Wolfgang Sachse, Meinig Family Professor of Engineering, a fashion aficionado who has photographed nearly every show in the past three decades. Prior to the start of the show, a selection of his images will play on large screens near the stage.

“Year after year, I appreciate the students’ creativity and vision,” Sachse said, “which always reminds us that while clothes may cover our body, they should free our soul.”

Tickets are $12 presale and $15 at the door. Visit the redesigned FSAD website for more information.