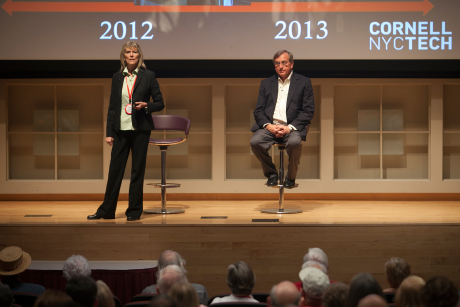 The growth of Cornell Tech over the next few years will be exciting to watch and in many ways similar to what we see on the Ithaca campus, but with a novel approach. That was the message for alumni who filled Statler Auditorium June 7 for a Reunion 2014 presentation by Provost Kent Fuchs and Cornell Tech Vice President Cathy Dove.

Fuchs likened the launch of the new campus to the founding of Cornell. Just as Ezra Cornell and Andrew Dickson White competed successfully against other hopefuls to secure Morrill Land-Grant funding to create Cornell, the university, in partnership with the Technion-Israel Institute of Technology, competed with several other institutions to win New York City’s support to create its new technology-centered campus.

Cornell Tech has its own version of the land-grant responsibility, Fuchs added – a sort of land-grant institution for New York City, whose purpose is to boost the city’s economy and improve the lives of its residents. Cornell Tech’s goal is to “reimagine graduate education,” Dove said, to produce graduates who combine technical savvy with an entrepreneurial spirit. A key component their education will be to do projects with companies or create their own startups.

It won’t happen overnight, Dove said, although growth is underway. “Two years ago we had two employees,” she said. “Now we have 60.” Two classes have graduated, with master’s degrees in engineering and computer science. Next semester will bring two more degree programs to campus: an MBA conferred by the Samuel Curtis Johnson Graduate School of Management and an M.S. in information systems with a focus on “connective media,” hosted by the Jacobs Technion-Cornell Innovation Institute. Students from all three master’s programs will work together on joint projects.

For now, Cornell Tech operates out of space donated by Google. The city’s support includes land on Roosevelt Island where a new campus will be built, but demolition of old buildings on the site will still take about 14 months, Dove said. First will come an academic building designed with open spaces to encourage interdisciplinary collaboration. A residential tower next door will house students, faculty and staff. These will be flanked by a “co-location” building occupied by startup tech companies, established tech companies and other business partners.

The buildings will deploy solar panels and will be designed for maximum energy efficiency. The entire site will be raised to allow for future sea-level rise due to climate change. The increased height was validated – and increased further – after Hurricane Sandy’s flooding, Dove noted. Most critical building machinery will be located on upper floors.

The Roosevelt Island campus will begin operation in the summer of 2017, she said, but it won’t be completed until 2037.

Questions from the audience were mostly about money: How will growth and operations be funded? How much will the tuition be? The overall answer, Dove said, is “the same as the rest of Cornell.” Funding will come from tuition, philanthropy and research grants.

Alumni have a lot to look forward to, Fuchs concluded. “As we celebrate 150 years, we have a glimpse of the next 150 years,” he said.