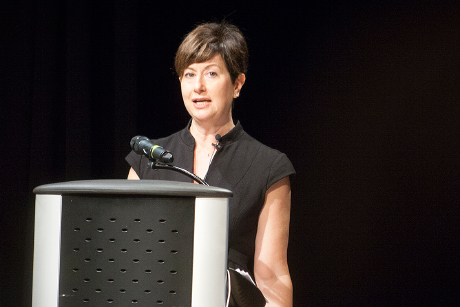 Cornell Tech in New York City is a graduate campus, but promoting computational thinking and doing for much younger students has, from its inception, been part of Cornell Tech’s core mission.

Computer science education, while on the increase, is still lacking in the nation’s public schools, particularly among girls and underrepresented minorities, said Diane Levitt, director of K-12 education at Cornell Tech.

Levitt outlined Cornell Tech’s commitment to promoting these skills for students in New York City and in Ithaca during the E3 (Engage, Educate, Empower) Conference at Ithaca High School, July 30, attended by educators across the region.

It’s true that many students today have access to laptops and tablets, “but we almost never give them the keys to the technology kingdom,” Levitt said.

“We don’t teach them how the software and hardware they’re using work, despite the fact that we know they are very curious,” Levitt said. “We don’t give them the tools to innovate, and we don’t create the problem-solving pathways that support so much other learning.”

What’s more, New York state does not offer a teaching certificate for computer science. That’s part of the problem – there are no courses to take, because there’s no one to teach them, she noted.

While teachers cannot be expected to become subject matter experts overnight, they can be students’ coaches and mentors in getting interested in technology. Teachers can understand the basics of computing so “we can learn to get out of our own way” and transform the core of public education into one with more focus on technical competency in an increasingly digital world, Levitt said.

She urged everyone to participate in the “Hour of Code,” for example, a national initiative coinciding with Computer Science Education week that encourages everyone to use online resources to try an hour of coding.

Cornell Tech is changing education at the graduate level, too, blending business, computer and relevant engineering disciplines and overlaying them on digital technology domains such as connective media, health and the built environment. Cornell Tech is creating a rich interdisciplinary network of research and graduate education, Levitt said.

Its commitment to K-12 education is part of this newness, Levitt said. For example, Cornell Tech is developing a curriculum for computational literacy for both teachers and students, which is to be shared with New York City and Ithaca schools at a later date.

“I want you all to be part of this revolution where we redesign the ‘T’ in STEM [Science, Technology, Engineering, Math],” Levitt said.